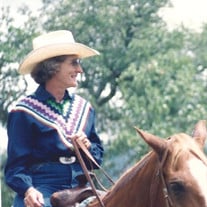 Maude Ann Epperson Kuykendall, 92, of Cherokee, Texas, was born on January 8, 1930, and passed away January 18, 2022. She was born in Llano County, the daughter of Quinna Elizabeth and James Enoch Epperson, the youngest of their four children. Paul, an apostle of Jesus Christ, said in 2 Timothy 4:7, "I have fought the good fight, I have finished the race, I have kept the faith". Maude Ann Kuykendall was a fighter, a finisher, and faithful to the end, and she continued a legacy of strength from her ancestors. James L. Epperson, Maude Ann's great grandfather, was one of the first pioneers to settle in the Valley Spring area of Llano County. His sons, Franklin, James, and Maude Ann's grandfather, George L. began ranching on the open range. They were noted for their fine horses and veterinary knowledge. Many called on them to help with sick horses and cattle. About 1906, they bought a two-year-old registered Standardbred stallion from Missouri. His name was Kallamus, and his sire was Kremelin, the world champion trotting horse in 1892. The Eppersons also purchased another registered Standardbred stallion, Kentucky Boy, in 1906. Maude Ann's father said that during the horse and buggy days, more than half of the good buggy horses in Llano and surrounding counties were sired by their stallions. George L. Epperson, a Texas Ranger, brought the first registered Polled Herefords to Llano County in 1910 and was the first in Llano County to vaccinate cattle for blackleg. It was said that he spent about two months a year each fall for several years, going from ranch to ranch vaccinating the neighbor's calves. He traveled in a two-wheel cart drawn by his fine stallions. James E. Epperson sold his Valley Spring ranch in 1940 and moved to a larger ranch in Cherokee. Moving just 20 miles in 1940 was not an easy task because they drove the cattle on horseback. Maude Ann was only nine years old but persuaded her Daddy to let her ride all the way. It is interesting to note that Warren Kuykendall, Maude Ann's future father-in-law, volunteered his pens for use to water and brand the cattle as they passed through. Maude Ann said the best thing about the Cherokee ranch was the creek. Buffalo Creek was a wonderful swimming hole, and they would catch fish and invite all of Cherokee out for fish fries. Her father, James E. "Jim" Epperson was highly respected and appreciated in the Cherokee community and dedicated to growing the Cherokee Church of Christ. His long-cherished dream was fulfilled when the Cherokee Home for Children was opened in 1956 with him serving as President of the Board. Maude Ann's family history explains her love for God and the "fight" and "finisher" spirit that dwelt in her soul. It also explains her love for horses, ranching, and the land. It ingrained in her the desire to help her neighbors and practice genuine hospitality to all. It also explains how she fell in love with Warren Kenneth Kuykendall and married him on October 15, 1950. They both came from two pioneer families that settled in the Central Texas Hill Country to ranch and raise their children. Both families had Texas Rangers, ranching, and community involvement in their bloodline. They were an inseparable pair with a pure love that lasted 70 years. Maude Ann and Kenneth worked together to develop some of the best Charolais cattle in the nation. They were also successful raising sheep and Angora goats and improving the ranch land. Maude Ann was always supportive of Kenneth in his life-long service with the Soil and Water Conservation Districts (SWCD) of Texas and at the National Association Conservation Districts (NACD). Along this journey, her talents were not unnoticed. In 1964, Maude Ann Kuykendall was awarded the honor of State of Texas Homemaker, and in 1979, she received recognition from the Texas Association of SWCD for dedicated support of conservation. 1986, she was chosen Woman of the Year by the south-central region of the NACD. She served as the first President of the Auxiliary in the Texas Association of SWCD. Maude Ann taught children's Bible classes at the San Saba Church of Christ and served as an Elder's wife for decades. She also helped children with their 4-H Club projects including showing of calves, lambs, swine, and horses; sewing; cooking demonstrations; music and Share-the-Fun contests. Maude Ann enjoyed music and could play any instrument she wanted. She loved to entertain by singing and playing the piano or guitar. She played the alto saxophone and the cornet in the San Saba High School Band and at Abilene Christian University. She was San Saba High School Drum Majorette and helped keep the high school band together while the band director served in the military. Aside from all of her earthly accomplishments, her greatest was her love for the Lord, and Maude Ann Kuykendall finished well. She was preceded in death by her husband, Warren Kenneth Kuykendall; parents, Quinna Elizabeth and James Enoch Epperson; siblings, Catherine Elizabeth Hiilsmeier, James Derrell Epperson, George Douglas Epperson; and son-in-law, Ned Bower Little. She is survived by two sons, Jay Kenneth and Charley Warren Kuykendall; her daughter, Elizabeth Ann Little; grandchildren, Curtis Little, Laura Vanek, Kimberly Studdard, Nyle Little, and Nerissa Papajohn; and loving great-grandchildren. She will be buried by her husband's side at the Gray Cemetery in Cherokee, Texas. Funeral arrangements are entrusted to Heritage Funeral Home of San Saba. Please view Ms. Kuykendall's online memorial at www.heritagefuneralhomes.com

Maude Ann Epperson Kuykendall, 92, of Cherokee, Texas, was born on January 8, 1930, and passed away January 18, 2022. She was born in Llano County, the daughter of Quinna Elizabeth and James Enoch Epperson, the youngest of their four children.... View Obituary & Service Information

The family of Maude Ann Kuykendall created this Life Tributes page to make it easy to share your memories.

Send flowers to the Kuykendall family.