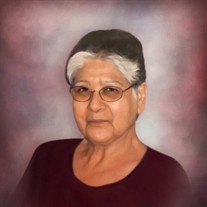 Manuela Adelia Sapien (Della), 73, of Lampasas, Texas died on July 14, 2021, at Scott & White Medical Center in Temple, Texas. She was born on August 28, 1947, in Lampasas, Texas to Gumencindo and Manuela (Longoria) Sapien. She had lived in Lampasas all her life. Della graduated from Lampasas High School in 1968. She was a member of St. Mary’s Catholic Church in Lampasas. Della worked for the Lampasas Independent School District for 20 years in the Child Nutrition Program at various campuses. After retiring from LISD she enjoyed traveling to Louisiana and Oklahoma to try her luck. She enjoyed cross-stitch, sewing, crafts, and creating garments for her nieces. She loved to bake goodies for the nieces and nephews to enjoy around the holidays. Crossword puzzles kept her busy. Della leaves behind her very special companion, Anna Bell, her beloved dachshund. Della is survived by three brothers, Ines Sapien of Terrell, Texas, Joe Sapien of Lampasas, and Daniel Sapien of Terrell and by one sister, Frances Arzola of Kelso, Washington. She is survived by numerous nieces and nephews, and great nieces and nephews. She was preceded in death by her parents, one brother, Selestino Sapien and one nephew, Tony Sapien. There will be a Visitation and Celebration of Life for Della from 6:00 – 8:00 PM on Tuesday, July 20th at Heritage Funeral Home. The funeral ceremony will be at 10:00 AM on Wednesday, July 21st at St. Mary’s Catholic Church in Lampasas with burial to follow at Oak Hill Cemetery in Lampasas. Father Boniface Onjefu will officiate. Memorial donations are invited to be made in Della’s honor to Best Friends Animal Society. Please go to www.bestfriends.org to donate. Arrangements are entrusted to Heritage Funeral Home of Lampasas.

Manuela Adelia Sapien (Della), 73, of Lampasas, Texas died on July 14, 2021, at Scott & White Medical Center in Temple, Texas. She was born on August 28, 1947, in Lampasas, Texas to Gumencindo and Manuela (Longoria) Sapien. She had lived in... View Obituary & Service Information

The family of Manuela Adelia Sapien created this Life Tributes page to make it easy to share your memories.

Send flowers to the Sapien family.