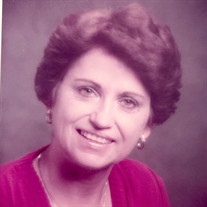 Lucille (Lucy) Sydow, 84, of Lampasas, passed away surrounded by her loved ones on December 1, 2021. Lucy became a resident of Lampasas two years ago moving from Pontotoc, Texas after the passing of her husband, Robert. Lucy (Kacal) was born on March 31, 1937, in Hillje, Texas to Joseph and Mary Sliva Kacal along with nine brothers and sisters. She was raised in El Campo, Texas graduating from El Campo High School. After graduating she moved to Houston, Texas where she met her future husband, Robert. Lucy and Robert married on October 6, 1956, in Houston. They lived in the Houston area where they raised their two children. Lucy worked at American General Insurance and Mustang Tractor during her time in Houston. In her later years Lucy and her husband moved to their ranch in Pontotoc, Texas located in the Texas hill county just outside of Llano. The ranch had many pet deer which she enjoyed feeding by hand, including a special doe names “Sue” who lived to 18 years. Lucy was a strong, hardworking woman with an enormous heart and was loved by everyone that knew her. She enjoyed spending time with her family, especially during the holidays as her passion was baking and cooking for everyone, especially her grandchildren. Lucy was proud of her Czech/Bohemian heritage and Catholic faith. All of which included her love for kolaches and dancing. She is preceded in death by her husband, Robert and siblings, Clem, Raymond, Della, Evelyn, Mary, Bill, Martha and one infant brother, John. Lucy is survived by her daughter, Deborah Sydow-Jennings, and husband Wayland of Lampasas, her son, David Sydow, and wife Heather of Houston, one sister, Millie Kacal Burt of Sugarland and one brother, Joe Kacal of Alvin and her lab, Buck. She had eight grandchildren: Chris (wife, Laina), Jenny (husband, Matt), JR (wife, Kristian), Kayla, Zach, Brooke, and Cheyenne. Lucy was also blessed with seven great grandchildren. There will be a family visitation time from 5-7 PM on Thursday, December 9, 2021, at Heritage Funeral Home in Lampasas. The funeral service will be at 1:00 PM on Friday, December 10 with Pastor Paul Allen officiating, also at Heritage Funeral Home. The brief graveside service will be held at the Pontotoc Cemetery, off Highway 71, following the funeral. Maps to the cemetery will be available at the funeral home. Afterwards, family and friends are invited to the Sydow Ranch for food and beverages. Pallbearers serving include Chris Schielack, JR Sydow, Jason Kacal, Tracy Lee, Tommy Klovenski and Zach Fountain. Arrangements are entrusted to Heritage Funeral Home of Lampasas, Texas.

Lucille (Lucy) Sydow, 84, of Lampasas, passed away surrounded by her loved ones on December 1, 2021. Lucy became a resident of Lampasas two years ago moving from Pontotoc, Texas after the passing of her husband, Robert. Lucy (Kacal) was born... View Obituary & Service Information

The family of Lucille Kacal Sydow created this Life Tributes page to make it easy to share your memories.

Send flowers to the Sydow family.