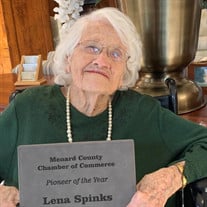 Lena Marguerite Peavy Horton Spinks made her final journey in this life to her Heavenly home on October 31, 2020, at the age of 100 years, 10 months, and 16 days after succumbing to COVID-19. She lived her life to the fullest while preparing for the day her Lord would call her home. A graveside service and burial will be held on Thursday, November 5, 2020, at 1:00 p.m. She will be laid to rest at Rest Haven Cemetery in Menard alongside her Peavy family. Lena was born December 15, 1919, the eighth child to Charles Edward and Pharo Sarah Peavy in the Ellis Community in Menard County, Texas. She attended school in the one-room Ellis Schoolhouse in Menard through 11th grade. Lena was a lifelong member of the Church of Christ, and she loved her church and her fellow church members. She considered them to be her family. Her close friend and former pastor, Mike Riley, will officiate her final service. Lena was preceded in death by her parents Charles and Pharo Peavy and her eight siblings. Her five brothers were Oliver, James, Emit, Fred, and Albert Peavy. Her three sisters were Pauline Mayes, Edith Benton, and Nezzie Parker. She was preceded in death by two husbands: Malcom (Shorty) Horton and Roy Spinks. She was also preceded in death by the three stepchildren she raised: Ruth Johnson and Jimmy and Lloyd Horton. Grandchildren who have gone on before her were Sheron Richoux, Ricky Johnson, Butch Horton, James Malcom Horton, and grandson-in-law Wayne Maxey. Loved ones left to cherish her memory are son and daughter-in-law Rhome and Virginia Hill; seven grandchildren including Patricia Fisher and husband, Rodney Cleston; Donna Maxey; Lance Hill and wife, Gena; Theresa Castilla and husband, Sean; twenty-four great grandchildren, including Ayden Matlock, Joshua Castilla, Margaret Castilla (Lena’s namesake), Abraham Hill, and Jude Castilla; twenty-six great-great grandchildren, and two great-great-great grandchildren, plus one on the way. Lena also had numerous nieces and nephews who were near and dear to her heart. Pall bearers will be Stanley Spinks,Benny Kothmann, John Pierce, Shan Click, Joe E Baker, Andy Spinks, Cleston Fisher. Honorary Pall Bearers, Chester Low, Felton Spinks, Jay Click, And all members of The Church of Christ, Menard.

Lena Marguerite Peavy Horton Spinks made her final journey in this life to her Heavenly home on October 31, 2020, at the age of 100 years, 10 months, and 16 days after succumbing to COVID-19. She lived her life to the fullest while preparing... View Obituary & Service Information

The family of Ms Lena M Spinks created this Life Tributes page to make it easy to share your memories.

Lena Marguerite Peavy Horton Spinks made her final journey in...

Send flowers to the Spinks family.