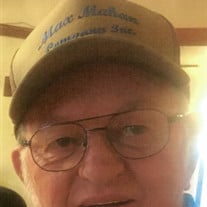 Lawson Neal (Huck) Agnew passed from this life into the presences of Jesus July 29, 2021, at his home in Brady. Lawson was born to Elvin & Mewzette Agnew January 31, 1943, in Moran, Texas. He is survived by his daughter, Shelli Renee Loftin and husband Gerald, grandchildren Travis Kemp of Richard, Louisiana, Robert Tanner Kemp of Leander, Victoria Chrisman and husband Joe of French Lick, Indiana, Titus Loftin of Leander, Tawni Loftin of Leander, sister Zona Rains of Fort Worth, nieces Donna Minnies and husband Marc of Whitney, Ronda Lanier of Fort Worth, Clydean Simanskis of Kingsland, Kellene Graves of Kingsland, nephews Russell Rains and wife Sonya of Burleson, Mitchell Rains and wife Kari of Weatherford, Pernell Coats and wife Debbie of Llano and Gary Alsup of Amarillo, great-granddaughter Candace Kemp, great-grandson Charlie Chrisman and numerous great nieces and nephews. Lawson was preceded in death by his parents Elvin and Mewzette Agnew, sisters Imogene Stephenson, Wanda Coats and Rita Lanier. Lawson was a member of Gateway Church of Brady and often spoke of his love and respect for Pastor Ruede. He enjoyed sharing his faith with those he came in contact with. In spite of his many health problems, he always stayed upbeat and had a funny story to share or a fun memory to recall. Lawson served in the Texas National Guard from 1964 until 1970 receiving an honorable discharge, he was a professional truck driver for over 40 years earning multiple million-mile safe driving awards. Lawson was a coffee connoisseur extraordinaire and knew all the best places to get a good cup of coffee, knew all the waitresses by name and considered them family. What Lawson lacked in academic achievement he far exceeded in many other ways. He was a master mechanic and loved fine tuning engines for performance and efficiency and just for the enjoyment of hearing them "humm". His work area and equipment reflected his attention to detail, and he expected the same from others. Lawson loved playing practical jokes on his friends and family, the higher the risk the better the joke. Lawson will be greatly missed by his family and friends, but he is HOME where he will forever be with his Lord and Savior who he was so anxious to see face to face. Memorial service will be held at 1:00 PM Saturday, August 7, 2021, at Heritage Funeral Home of Brady. The family would like to thank each of you for your friendship, care, concern, gifts of food and visits and for being here today. Funeral arrangements are entrusted to Heritage Funeral Home of Brady. Please view Mr. Agnew's online memorial at www.heritagefuneralhomes.com

Lawson Neal (Huck) Agnew passed from this life into the presences of Jesus July 29, 2021, at his home in Brady. Lawson was born to Elvin & Mewzette Agnew January 31, 1943, in Moran, Texas. He is survived by his daughter, Shelli Renee Loftin... View Obituary & Service Information

The family of Huck created this Life Tributes page to make it easy to share your memories.

Lawson Neal (Huck) Agnew passed from this life into the presences...

Send flowers to the Agnew family.