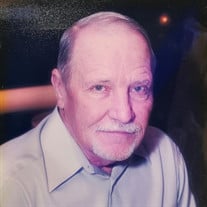 Larry Neal Herring, 78 of Kempner, Texas died on June 2, 2021, at St. David’s North Medical Center in Austin, Texas. He was born in Lampasas, Texas on March 17, 1943, to D.C. and Thelma (Hayter) Herring. Larry and Jorja Pickett married on June 5, 1964, in Kempner, Texas. He continued to live his entire life in the Lampasas area. He had been a mechanic, an electrician, and a gunsmith, working for the US Army. He was an outdoorsman, enjoying hunting, fishing and especially attending gun shows. Larry raised longhorn cattle for a while and now miniature donkeys. He owns a Jacob sheep named James and 2 Nigerian miniature goats named Mutt and Jeff. Mr. Herring was of the Baptist faith. He was preceded in death by his father. Survivors include his mother, Thelma Herring, of Lampasas, who turned 100 years old in January 2021, his wife Jorja Herring of Kempner, three sons, Steve Herring (Andreas) of Lampasas, B.J. Herring (Silla) of Lampasas and Kris Herring of Kempner. He is survived by one daughter, Tracy Herring of Cedar Park, Texas, one brother, Glenn Herring (Denise) of Lampasas and one sister Darlene Rutland (Jim) of Lampasas. There are five grandchildren surviving, Brandon Herring (Sierra), Ty Herring (Karen), Tayler Herring, Riley Herring, Jayden Herring and one step granddaughter, Kyara Maldonado. There will be a visitation at 11:00 AM on Saturday, June 5, 2021, at Heritage Funeral Home in Lampasas. Arrangements are entrusted to Heritage Funeral Home of Lampasas.

The family of Larry Neal Herring created this Life Tributes page to make it easy to share your memories.

Send flowers to the Herring family.