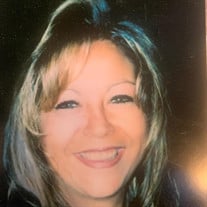 LaDonna Marie Sapien Melendez, 50, of Terrell, Texas died on August 22, 2021, at Lake Pointe Medical Center in Rowlett, Texas. She was born on December 31, 1970, in Dallas, Texas to Daniel Sapien and Ramona Hartsell Sapien. As a child she lived in Lampasas and moved to the Dallas area when she was a teen. She and Joe Melendez married on December 31, 1988, in Wylie, Texas. LaDonna was a wonderful mother. She adored taking care of her children. She was a team mom, attending her children’s football, basketball, baseball, and cheerleading activities. She took wonderful care of her father and loved spending time with her mother. She was an excellent baker and made and sold her cakes. During her life she worked in daycare taking care of children. Her grandchildren were her world. She enjoyed spending crazy times with her sister. LaDonna is survived by her mother, Ramona Sapien of Terrell, one son, Anthony Melendez, and wife Destiny of Terrell, one daughter, Tierney Melendez of Terrell and one sister, Shaina Purnell, and husband Wess of Wills Point, Texas. She has two grandchildren, Lylah Melendez, and Anthony Melendez, II. She is also survived by two nephews, Liam Purnell, and Maddox Purnell. Preceding her in death are her father, one aunt, Della Sapien, her grandparents, Manuela and Gumencindo Sapien, one uncle Salestino Sapien and one cousin, Tony Sapien. The visitation for Mrs. Melendez will be from 5-7 PM on Saturday, August 28, 2021, at Heritage Funeral Home in Lampasas, Texas. The graveside service will be at 1:00 PM on Sunday, August 29, 2021, at Oak Hill Cemetery in Lampasas. Arrangements are entrusted to Heritage Funeral Home of Lampasas, Texas.

LaDonna Marie Sapien Melendez, 50, of Terrell, Texas died on August 22, 2021, at Lake Pointe Medical Center in Rowlett, Texas. She was born on December 31, 1970, in Dallas, Texas to Daniel Sapien and Ramona Hartsell Sapien. As a child she... View Obituary & Service Information

The family of LaDonna Marie Melendez created this Life Tributes page to make it easy to share your memories.

Send flowers to the Melendez family.