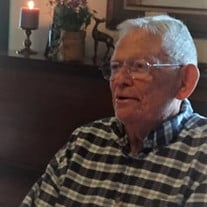 Kenneth Wayne Johnson passed away peacefully on November 7, 2021, at the Baylor Scott & White Hospital in Round Rock, Texas. He was born August 9, 1930, to Curtis Nixon Johnson and Elouise Hardin Johnson, in Donna, Hidalgo County, Texas. Kenneth graduated from San Saba High School, San Saba, Texas, in 1949. He graduated from Tarleton State University and then from The University of North Texas in 1953 with a B. A. in Industrial Arts. Kenneth married Letitia Annette Moss, on June 17, 1954, in Bonham, Fannin County, Texas. He was in the Air Force ROTC while in college, where he was on active duty for several years. He then transferred to the reserves until the late 1960's, when he separated as a Captain. In 1956, Kenneth began his career as a Secondary Industrial Arts teacher in Midland, then San Marcos, Lockhart, and Luling. He also taught Industrial Technology at Tarleton State University in Stephenville at the college level. He retired from teaching after nearly 30 years. To celebrate their retirement, Kenneth and Tish settled in Blanco, Texas and traveled the United States, Europe, and Canada. He loved his shop, where he built and repaired furniture, and collected more screws than anyone can find at the Home Depot. Never was there a stick of furniture on the side of the road that he couldn't pick up and refurbish. He enjoyed mowing the yard, tending the flower beds and other projects around the property. Dad is preceded in death by his wife, parents, sister, Linda Elouise Johnson, son, Michael Wayne Johnson and of course Miss Sugar, his beloved Westie. Kenneth is survived by son Gregory Wayne Johnson, (Sandra Moser) of Las Cruces, New Mexico; daughter Karan Kay Johnson, (Sienna Rivers) of Houston, Texas; daughter Elizabeth Annette Reno, (James Reno) of Blanco, Texas; 6 grandchildren, 2 great-grandchildren, loving friends, and former students. Visitation will be from 12:00 to 1:00 PM, and funeral will begin at 1:00 PM on Saturday, November 13, 2021 at the Heritage Funeral Home Chapel in San Saba, Texas. Interment will follow at the San Saba City Cemetery. The family requests memorials to the American Diabetes Association and the American Heart Society, in lieu of flowers. We would like to thank those who have supported and prayed for dad and our family. We take comfort knowing he is with those who went before him and rests in the arms of Jesus Christ. "Say not in grief 'he is no more' but in thankfulness that he was." Funeral arrangements are entrusted to Heritage Funeral Home of San Saba. Please view Mr. Johnson's online memorial at www.heritagefuneralhomes.com.

The family of Kenneth Wayne Johnson created this Life Tributes page to make it easy to share your memories.

Send flowers to the Johnson family.