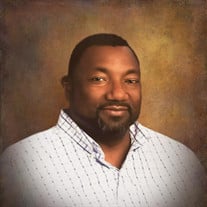 On Tuesday, April 6, 2021, in Round Rock, Texas, heaven gained a new angel when Kelly Robinson III, 54, left this earth for a place of paradise. Kelly began his journey in life on July 8, 1966, in San Antonio, Texas from the love of his parents, Kelly Robinson Jr. and Charsetta Mclean. He grew up as a passionate kid who adored sports and he was the keeper of plants, animals, and his siblings alike. He persevered through school and obtained his diploma at South Garland High School in 1984. Kelly had dreams of going to college and seeing the world so he declared his next step in life would be to serve his country and he officially joined the army later that year. There he explored many talents and took on roles such as an army recruiter, airborne special operations officer, French language identifier, and even had training as a vet technician. The army opened many doors of education for Kelly and he embraced this opportunity by achieving his associates in Liberal Arts at Harold Washington College, accomplishing his bachelor's at Troy University, and fulfilling his Masters in Human Resources at Chapman University. But Kelly didn’t stop there, he loved learning so much so that he even went back for his second masters at Concordia University to get his degree in Education. Military life expanded Kelly’s experiences as he saw the world. He served overseas in Korea, Italy, Turkey, Egypt, Cuba, Germany, Haiti, and Thailand. He even got the chance to travel his own United States for which he served for as he lived in Chicago, North Carolina, Arizona, Georgia, Washington, and lastly Texas as he retired in 2004 from his long expedition protecting his country. He most recently lived in Lampasas, Texas. For the past seventeen years, Kelly went far and beyond raising all five of his kids. Caretaking for them was one of the biggest accomplishments in his life. Furthermore, he used that eagerness to help younger generations as he became a youth pastor before he felt that he was called to serve god as a teacher. He believed every child deserves to have a supportive father figure in their life and he vowed to be that for his students. He sought out to help young kids like him know that it's possible to attain their dreams. Kelly was an extraordinary husband and friend to his wife Annette. He was always there for her when she needed a shoulder to cry on or someone to lend an ear. They bonded through motorcycle rides, going to vineyards, and spending time together. Annette professes that Kelly truly was the love of her life, and his fingerprint will always have a home in her heart. Kelly enjoyed many things that were unique to his personality. He loved hunting, fishing, hiking, running, biking, camping, and coaching. Even down to the little things like he enjoyed bubble yum gum, hot tamales cinnamon candy, frozen grapes, fruit cocktail, german chocolate cake, saltine crackers with crunchy peanut butter and jelly, carmex chapstick, cocoa butter and his chickens. All of these things are simple reminders to those closest to him of what he loved and enjoyed. Kelly was the type of person people were drawn to. Something about him pulled people in and they just had to spill their life story to him. He would always smile, laugh, and listen. He made people feel safe, he made people feel comforted, and he made people feel loved. Everyone who’s ever met him knows he left an impression, and they never forget Kelly Robinson III. Kelly could probably fill an entire cowboy’s stadium and beyond with those who know and love him. Those people will keep his memory alive with stories that keep his light here on earth. That light is what everyone saw each time they came into contact with him and it will never fade. Kelly radiates through his wife Annette Robinson, his sons Chris (Lindsey) and Kelly Robinson IV “KC”, his daughters Alenia, Arianna, and Ebony. That spark also continues through his mother Charsetta, his father Kelly Robinson Jr, his brother Aubrey Dewayne, his sisters Arlene Robinson and Charlene (William) Robinson-Brooks, and his countless cousins, nieces, nephews, aunts and uncles. We love you Kelly, Dad (Daddy), son, brother, and friend. The funeral service for Mr. Robinson will be at 2:00 PM on Monday, April 12, 2021 at Heritage Funeral Home in Lampasas with Pastor Mark Balderson officiating. Visitation will follow until 4:00 PM, also at Heritage Funeral Home. Mr. Robinson will be interred at Central Texas Veterans Cemetery in Killeen, Texas at a later date. Memorials to Mr. Robinson may be made to Lonestar Fostering Connections, 302 N. Heatherwilde, Ste. 200, Pflugerville, Texas 78660. Funeral arrangements are entrusted to Heritage Funeral Home of Lampasas.

On Tuesday, April 6, 2021, in Round Rock, Texas, heaven gained a new angel when Kelly Robinson III, 54, left this earth for a place of paradise. Kelly began his journey in life on July 8, 1966, in San Antonio, Texas from the love of his parents,... View Obituary & Service Information

The family of Kelly Robinson, III created this Life Tributes page to make it easy to share your memories.

Send flowers to the Robinson, family.