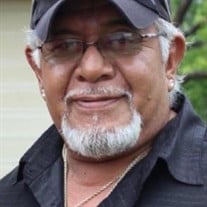 Julian B. Ramirez, Jr. 62 years of San Saba, TX passed away peacefully on Tuesday, March 30th, 2021 at his residence surrounded by his loving children and family. Julian was born July 22nd, 1958 in San Saba, TX to Julian and Maria Ramirez Julian was a supervisor for Casting Design’s for 13+ years before his illness. He was an avid golfer and would spend as much time as possible on the golf course. His other hobbies included playing pool, bowling, and spending as much time with his family and grandchildren as possible. He loved to BBQ for his friends and family and was known for always lending a helping hand to anyone in need. Julian was a loving son, brother,uncle, husband, father, and grandfather that will be dearly missed. He is preceded in death by his father, Julian C. Ramirez, mother, Maria B. Ramirez and sister, Mary Alice. He is survived by his siblings, Mary Ramirez, Susie & Lewis Garza, Bea & Danny Peek, Janie Jimenez, Virginia (Chuco) Ramirez, Berta Ramirez, Felix Ramirez, Ricky Ramirez, Julie and Mark Martin. He is also survived by his children, Michael Ramirez (son) and wife Jessica Ramirez of Irving, TX, Christina Tollett (daughter) and husband Anthony Tollett of Grandview, TX; his grandchildren Analyssa Ramirez, Jonathan Savage, Aryana Savage, Lillie Tollett and Logan Tollett. .Pall Bearers: Anthony Tollett, Mark Martin, Scott Osteen, Carlos Perez, Joe Perez, Jr, Ray Saucedo, Chaz Rohman and Jason Garcia. A visitation service will be held from 1-8 with a rosary from 5-6 at Heritage Funeral home of San Saba on Monday, April 5th with a Mass of Christian Burial being held at 11am at St. Mary Catholic Church. Interment will follow at San Saba City Cemetery. Donations can be made to the Never Surrender Cancer Foundation.

The family of Julian B Ramirez Jr. created this Life Tributes page to make it easy to share your memories.

Send flowers to the Ramirez family.