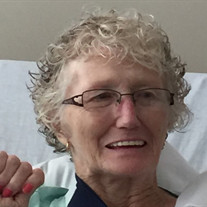 Judith Evelyn "Judy" McCoury, age 81, of Brownwood, passed away Sunday morning, January 16, at the Hendrick Medical Center, Brownwood. She was born March 18, 1940, in Kilgore, Texas, the daughter of D. K. Waters and Mary Alzoda Carter Waters. Following her graduation from high school, she attended Odessa College and received her nursing license. She was married to J. L. Johnson in 1953 and he preceded her in death in 1995. She later married Adam Tidwell on March 16, 1996, in Brownwood and he also preceded her in death. She then married James McCoury who died on January 9, 2021. She worked for 11 ½ years as a nurse for MHMR and had lived in Brownwood since 1978. She was a member of High Mesa Cowboy Church and will be remembered for her strong Christian beliefs. She was a very loving mother and grandmother, who had a strong love for her family. She is survived by her son, Garron Don Johnson of Brownwood, three daughters, Dewana Dell Johnson of Andrews, Tammy Dylene Caspar and husband Cliff of Brownwood, and Shelly Johnson and spouse Gary Craddock of Brownwood. Eight grandchildren, ten great-grandchildren, and two great-great grandchildren also survive. She also is survived by her faithful and loving dog, Penney. She was preceded in death by her three husbands, a son, Nathan Wayne Johnson, and a brother and sister, Jane Hanzick and Gene Lee. Visitation will be held from 5 - 7 PM on Tuesday, January 18, at the Davis-Morris Chapel of Heritage Funeral Home. Funeral services will be held at 11 AM on Wednesday at the funeral home with burial to follow at the Greenleaf Cemetery. Services entrusted to the care of Heritage Funeral Home, Davis-Morris Chapel. Friends and family are encouraged to view the online memorial at www.heritagefuneraltx.com.

The family of Judith Evelyn McCoury created this Life Tributes page to make it easy to share your memories.

Send flowers to the McCoury family.