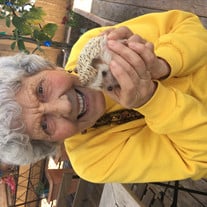 Johnnie Ethel Horton, or Nana, as she was so affectionately referred to as, spent the last 90 years building a beautiful legacy by loving all her people well and by focusing on moving just "five rocks a day." Nana was born in Rockwood, Texas on August 9, 1931, to Johnnie and Geneva Steward. She spent most of her childhood tromping across the Texas countryside wearing flour sack dresses made by her mother while her sister, Billie Jeanette, and she helped their daddy around the farm. They would round up the hogs and chickens, so they could later help their mother in the kitchen make pork cracklings and fry up fresh eggs. They spent their summers saving their allowance so they could attend the traveling picture show that made its way into town once a year. When Nana was 7 years old, her family welcomed a new baby brother, James Leroy, who she loved to dote on. Some of her favorite memories were sneaking out to the barn to listen to him play his guitar. After graduation from Santa Anna High School in 1948, where she was voted Most Popular and was a cheerleader, she became a teacher at Rockwood Elementary. During this time, she finally gave in to a high school friend that had been "sweet on her" for years and started dating Olin Horton, our Daddo. They went on to marry on her mother and daddy's front porch on December 21, 1950. They had their first child Johnny Wayne Horton the following September. Their little family of 3 who had never been outside of Coleman County loaded up and journeyed to California by car. Nana kept their home on base, while Olin served in the Navy. They eventually landed back in Rockwood after her daddy drove cross country to bring them home. While in Rockwood, Nana commuted back and forth to Austin to complete her master's degree in education at the University of Texas. She walked across the graduation stage one hot summer day in August of 1954 and gave birth to her daughter, Sharon Denise, the following day. Shortly after that, they loaded up once again to move to Andrews where they would settle in and both serve Andrews Independent School district. Nana loved every second watching her children grow up and be involved in local activities. During this time, they created a community of friends, many that eventually became part of her family. Nana retired from Andrews ISD in 1985 after 35 years of service as a Reading Specialist. She and Olin soon moved to Brady, Texas to care for her parents, relish in her three granddaughters, and enjoy retired life on the lake. Nana spent her later years creating a beautiful Hill Country Oasis, where the lantana grew like wildflowers, the Monarchs fluttered during migration each Autumn, and the hummingbirds nested by the dozens. Most symbolically in her yard stood a sturdy rock wall that she built on her property by simply moving 5 rocks a day until eventually it stretched across her half acre property. When life would seem like it was throwing more than we could handle our family's way, she would simply purse her lips, look you straight in the eye and encourage you to focus on moving just 5 rocks a day. Nana slipped from this earthly world on Wednesday, May 25, 2022, with her 3 granddaughters singing and cheering her over the finish line. She will be laid to rest on Monday, May 30 in the Rockwood Cemetery. She is preceded in death by her parents, Johnnie and Geneva (Pampaw and Mamaw), her husband Olin (Daddo), her sister Billie (Aunt B), brother James (Uncle James/Daddo), and her daughter Denise (Neisa). She is survived by her son and daughter in law, Johnny and Susan, who so tenderly cared for her in her late life, her three granddaughters, Jenny and her husband Jason, Emily, and Rebecca and her fiancé Grant, along with five great grandchildren. We find comfort in the thought of our Nana sitting at the feet of Jesus. Well, actually... she is probably not sitting. It's highly likely that she has just baked Him a poor boy cake and is wiping His counters down clean while she watches Him enjoy it before putting on her sweats and finding a special place in His garden to get her hands in the dirt. She is probably planting the brightest, yellow lantana bush you could ever imagine. What we do know with certainty is that she was met with the words "Well done good and faithful servant." Our Nana has without question earned her rest. In lieu of flowers, please send donations to the Rockwood Cemetery Association in her name at PO BOX 695, Rockwood, Texas, 76873. Graveside services will be at 11:00 AM on Monday, May 30, 2022 in Rockwood Cemetery. Funeral arrangements are entrusted to Heritage Funeral Home of Brady. Please view Ms. Horton's online memorial at www.heritagefuneralhomes.com

Johnnie Ethel Horton, or Nana, as she was so affectionately referred to as, spent the last 90 years building a beautiful legacy by loving all her people well and by focusing on moving just "five rocks a day." Nana was born in Rockwood, Texas... View Obituary & Service Information

The family of Johnnie Ethel Horton created this Life Tributes page to make it easy to share your memories.

Johnnie Ethel Horton, or Nana, as she was so affectionately referred...

Send flowers to the Horton family.