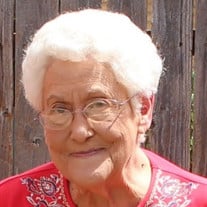 Johnnie Belle Davis Bradshaw, 89, of San Angelo passed away of natural causes on Friday, January 21, 2022, in San Angelo, Texas. Graveside services will be held at Rest Haven Cemetery in Brady, Texas on Saturday, January 29th at 2:00 PM. Johnnie was born on February 29, 1932, in Sutton County, Texas, to Pearl Fletcher Davis and John Henry Davis. She married Alton Benson "Dick" Bradshaw on December 18, 1948, in Mason, Texas. They were married for 59 years before his death in 2007. She was a homemaker and wife for many years, followed by employment at Huffman's Clothing Store and Brady National Bank. Before moving from Brady to San Angelo in 2009, she was active in the First United Methodist Church and the local Red Hat Ladies Club. For many years she used her artistic abilities creating arts and crafts and attending craft shows all over central Texas selling her goods. Johnnie loved raising flowers and many times people would drive by her house just to see the beautiful plants and flowers that decorated her yard. She had a deep love for her children, grandchildren and great grandchildren. Survivors include two daughters, Beth Taylor and husband Merle of Snyder and Janice Timms and fiancé Terry Fannin of San Angelo. She was a proud MawMaw to 4 grandchildren, Josh Timms and wife Krista of Cibolo; Brandon Taylor and wife Rhanda of Locker; Jeremy Timms and wife Courtney of Corpus Christi, and Nikki Timms of San Angelo as well as 7 great-grandchildren, Scarlet, Raiden, KJ, Amelia, Caison, Jaxon and Holden. She is also survived by one brother Jimmie Davis and wife Pat of Lewisville, Texas. She is preceded in death by her mother and father and her husband Dick Bradshaw and son Alton Bradshaw. Funeral arrangements are entrusted to Heritage Funeral Home of Brady. Please view Ms. Bradshaw's online memorial at www.heritagefuneralhomes.com

The family of Johnnie Bradshaw created this Life Tributes page to make it easy to share your memories.

Johnnie Belle Davis Bradshaw, 89, of San Angelo passed away of...

Send flowers to the Bradshaw family.