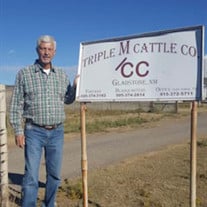 John Marcus Martin, age 75, of San Saba, Texas, went to be with our Lord and Savior on February 15, 2022. He was a solid Christian man that loved the Lord and his family. Mark was born October 6, 1946 in Plainview, Texas to Charlie and La Verne Martin. He spent his childhood on the farm, in Hart, Texas, with his parents and his younger brother, Doug Martin. After graduating from high school in Hart, Texas, Mark joined the Corp of Cadets at Texas A&M University. While attending summer school at West Texas State, Mark met Carol Ann Sugar at the "Howdy Dance". It was love at first sight. They married on June 8, 1968 in White Deer, Texas. They returned to College Station for Mark to finish his senior year of college. After graduating on a Saturday, their daughter, Amy Martin, was born and they moved to San Saba four days later. Mark then began running the family ranching and farming operation here in San Saba, better known as Triple M Cattle Company. Mark and Carol went on to have two more daughters, Christa Martin, born June 23, 1971 and Emily Martin, on September 18, 1975. Mark continued to grow the ranching and farming operation here in San Saba, and in 1991, Triple M Cattle Company purchased land in New Mexico, called the Don Carlos Ranch. His passion for the land and his cattle were obvious to anyone that knew him. He loved to ride in his truck, talk on his phone, and make deals. Mark also had a love and passion for Aggie Football. Most times, he couldn't even stand to watch the games on TV and would listen to the aggies on the radio in his truck. His love for the aggies spilled over to his growing family. Currently, there are four aggie graduates with more to come! Whoop! Mark and Carol continued to raise their three girls here in San Saba, and soon their family grew with the addition of 13 grandchildren and one great grandchild. He loved nothing more than having his girls and entire family together, enjoying card games, aggie football, dove hunting, fishing and just being together. Mark and Carol celebrated 53 years of love together this past June. He was preceded in death by his father, Charles Brady Martin, mother, Jewel La Verne Martin, and granddaughter, Mallory Ann Foreman. He is survived by his wife, Carol Martin; brother, Doug Martin; daughters, Amy Faught, Christa Petersen, and Emily Toungate; sons-in-law, Jim Faught, Jeff Petersen, and Chad Toungate; grandchildren, Paige Faught- 27, John Faught-24, Zach Brown- 22, Jake Faught-20, Emmary Pettersen- 20, Cooper Foreman- 19, Emily Toungate-19, Connor Foreman- 18, Ellie Pettersen- 18, Kenny Triplett- 16, Marcus Foreman-15, and Brynlee Foreman- 12; and great-grandchild, Everly Prentice- 7 months old. Pall bearers will be John Faught, Jake Faught, Zach Brown, Kenny Triplett, Cooper Foreman, Connor Foreman and Marcus Foreman. Funeral arrangements are entrusted to Heritage Funeral Home of San Saba. Please view Mr. Martin's online memorial at www.heritagefuneraltx.com

John Marcus Martin, age 75, of San Saba, Texas, went to be with our Lord and Savior on February 15, 2022. He was a solid Christian man that loved the Lord and his family. Mark was born October 6, 1946 in Plainview, Texas to Charlie and La Verne... View Obituary & Service Information

The family of John Marcus Martin created this Life Tributes page to make it easy to share your memories.

Send flowers to the Martin family.