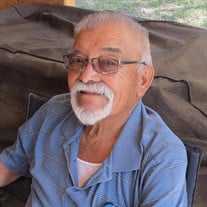 Joe A Perez, 83 of San Saba passed away on Sunday, February 14, 2021 surrounded by his loving family. Joe was born on December 6, 1937 to Eugenio and Josephina Perez of Lampasas and was the oldest of 17 children. Joe married Pauline Botello... View Obituary & Service Information

The family of Joe Perez created this Life Tributes page to make it easy to share your memories.

Send flowers to the Perez family.