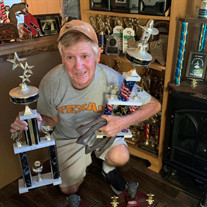 Joe A. Cook, 77, of Copperas Cove, Texas passed away on March 21, 2021 at his residence. He was born in Kempner, Texas to Freeman and Amanda Broadway Cook on June 22, 1943. Joe married Lillian Lemaster on November 6, 1976 in Killeen, Texas enjoying 44 years of marriage. Mr. Cook had resided in Copperas Cove for the past 35 years and was a member of the Broad Street Church of Christ in Lampasas, Texas. Joe served in the US Navy where he performed underwater demolition and served in Vietnam as an Amphibious Boat Coxswain. After serving in the Navy Joe obtained his Associate’s Degree in electrical repair from CTC. He worked for the Central Music Company in Killeen, Texas as well as the 7-11 Corporation. Later, he joined the TDCJ-ID as a corrections officer where he worked for 18 years and retired from the Hughes Unit in Gatesville, Texas. Joe was a proud member of the American Legion, Post 223, the 40-8 Organization, and the VFW where he would volunteer his time and services. Upon retiring from the TDCJ-ID he became a substitute teacher for Copperas Cove ISD which he loved. Joe also loved pitching horse shoes and was a member of the Texas Horseshoe Pitching Association. Joe is survived by his wife, Lillian (Lillie) Cook of Copperas Cove, Texas, his two sons, Joshua Cook (Sapna) of Mansfield, Texas and Jeremy Cook of Lampasas, Texas, one foster child, Marilyn Brackett of Copperas Cove, Texas, and his granddaughter, Shivani Cook of Mansfield, Texas. He is also survived by one brother, Edwin Cook (Barbara) of Killeen, Texas and two sisters, Genevieve (“BB”) Kelley of Lampasas and Janice Simpson (Larry) of Lampasas, Texas. On Saturday, March 27, 2021 at Heritage Funeral Home in Lampasas, Texas, there will be a family visitation with viewing from 3:00 – 5:00 PM with cremation to follow. Memorials may be given to the American Cancer Society in Mr. Cooks memory. Funeral arrangements are entrusted to Heritage Funeral Home of Lampasas.

Joe A. Cook, 77, of Copperas Cove, Texas passed away on March 21, 2021 at his residence. He was born in Kempner, Texas to Freeman and Amanda Broadway Cook on June 22, 1943. Joe married Lillian Lemaster on November 6, 1976 in Killeen, Texas... View Obituary & Service Information

The family of Joe A. Cook created this Life Tributes page to make it easy to share your memories.

Send flowers to the Cook family.