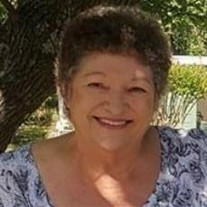 Mrs. Jo Spivey, 77, of Lampasas, Texas died on June 23, 2021, at Advent Healthcare in Killeen, Texas. Jo was born on September 5, 1943, in Brady, Texas to Hugo and Floy (Ludwick) Otte. She and Leonard Spivey were married at their home at 1205 W. First Street in Lampasas, Texas on October 17, 1981, enjoying almost 40 years of marriage. Mrs. Spivey had lived in Lampasas since 1965. She had several positions during her life, being a receptionist for Dr. Don Bullock for several years, a mortgage processor in Copperas Cove and Killeen as well as a bookkeeper for Jerry Goodson. Jo was an excellent cook and baker. While being involved with her children showing sheep, she joined the Lampasas Livestock Association and the Ladies Auxiliary. She soon began serving as the cook at the livestock shows and in 1989 spearheaded the Lampasas County Livestock Buyers Club Dinner. This tradition continues to this day. She was a caterer in Lampasas for many years, creating and serving her birthday and wedding cakes to many in the Lampasas community. She was famous for her cinnamon rolls and Italian crème cakes. Jo was so talented with her cooking she had traveled to Dallas and Corpus Christi to deliver her creations. Her children remember fondly their nightly homemade meals, around the table, lovingly prepared by their mother. Weekend breakfasts were a very special memory, gathering around the table for homemade cinnamon rolls and all the fixins’. Mrs. Spivey was of the Lutheran faith. Jo was preceded in death by her parents and her previous husbands, Jimmy Smithwick and Jesse Elvin Smith. She is survived by her husband, Leonard Spivey of Lampasas, three daughters, Lisa Smith Hall, and husband Paul of Kempner, Serina Spivey Parker and husband Britt of Midland and Amanda Nicole Lopez and husband Alberto of McGregor. She has seven granddaughters, Reece Davis, Kenzlee Parker, Lindzy Parker, Shyan Miller, Ramsie Flores, Blakelyn Lopez, Brynlee Lopez and one great-grandchild on the way in November 2021. Memorial donation may be made to the Lampasas Library or to the Lampasas Ladies Livestock Auxiliary. Arrangements are entrusted to Heritage Funeral Home of Lampasas.

Mrs. Jo Spivey, 77, of Lampasas, Texas died on June 23, 2021, at Advent Healthcare in Killeen, Texas. Jo was born on September 5, 1943, in Brady, Texas to Hugo and Floy (Ludwick) Otte. She and Leonard Spivey were married at their home at 1205... View Obituary & Service Information

The family of Jo Spivey created this Life Tributes page to make it easy to share your memories.

Send flowers to the Spivey family.