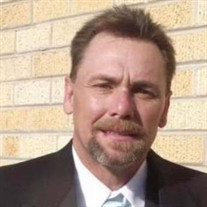 Jessie William Cox, 57, of Brady, Texas, passed away on Sunday, November 1, 2020 in Brady. He was born in San Marcos, Texas to Howard and Sarah (Davis) Cox on March 12, 1963. He married Elizabeth Ann Allen on December 4, 2004 in Pflugerville,... View Obituary & Service Information

The family of Jessie William Cox created this Life Tributes page to make it easy to share your memories.

Send flowers to the Cox family.