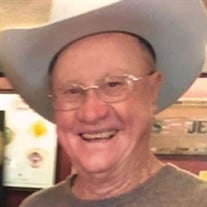 JAMES E. HIROMS Sr. June 22, 1940 – May 15, 2021 James E. Hiroms Sr. of Brownwood Texas, was called home to the Lord on May 15, 2021, after a brave battle with cancer. He passed peacefully, surrounded by family. James was a beloved husband, father, grandfather, great-grandfather, uncle, friend, and rancher. He was the first child born to Guy C. Hiroms and Vera Oliver Hiroms on June 22, 1940, in Austonio, Texas. Early in life, James moved to Corpus Christi with his mother and brother, Donnie, where he quickly learned the value of hard work. Doing his best to support his family from a young age, James dedicated himself to an early morning newspaper route before school and delivered for a local drug store in the evenings. He graduated from Sundeen High School, class of 1958, and furthered his education through trade school and joined the Sheet Metal Workers Union. As a journeyman, he contributed to many large projects including hospitals, high-rise hotels, and state government buildings. In 1980, James purchased the Hiroms Ranch, a plot of 45 acres in Brownwood, Texas, where he built his dream home with horses, dogs, chickens, and the occasional cow. Surrounded by the land and animals he loved, James remained in his home until his passing. James was married to Jo Ann Strube Hiroms on August 20, 2016. He is fondly remembered for joking that he and Jo Ann were on a perpetual honeymoon together. They loved to go dancing and enjoyed seeing their friends at the dances. Those of us lucky enough to know James saw a man who was truly one of a kind with a heart full of love, a big smile, quick wit, and a knack to make everyone laugh. He made a name for himself with children and parents across the great state of Texas, who remember James for his famous pony rides with Peanut, Midnight, and Oreo, among others. James is survived by his wife Jo Ann Hiroms, his two children, and their spouses: James E. Hiroms Jr. (Jennifer) and Kelli McClearin (Mark); his grandson: Austin Hiroms (Hannah), and two great-grandchildren Olivia and Ryatt, nephew Donnie Rivera Hiroms (Lisa) and great-nephews Jed, Samuel & Levi. He was preceded in death by his parents, Guy and Vera Hiroms, and his brother Donnie Hiroms. Visitation will be from 6 to 7 pm on Friday, May 21 followed by a memorial service at 7 pm at Davis-Morris Funeral Home located at 800 Center Ave, Brownwood, Texas. A private family burial will be held on Saturday afternoon at Porter Springs Cemetery in Crockett, Texas.

The family of James Edward Hiroms created this Life Tributes page to make it easy to share your memories.

Send flowers to the Hiroms family.