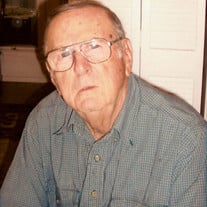 James (Jim) Alford Davis born in Menard County on November 14, 1929 passed this life on Wednesday, December 1, 2021. Jim lived at the Fritz Wilhelm Ranch in Menard County as a young child and his educational career began at the Clear Creek... View Obituary & Service Information

The family of James Alford Davis created this Life Tributes page to make it easy to share your memories.

Send flowers to the Davis family.