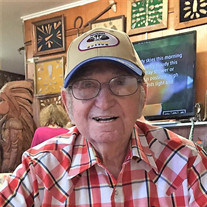 Baskum (Jack) Earl Morris, 87 passed away at his residence in Lampasas County on April 5, 2021. He was born in Scottsboro, Alabama on April 26, 1933 to Baskum and Ada Eakin Morris. He and Doreen Kureger were married in Copperas Cove, Texas enjoying 37 years of marriage. He had lived in Lampasas initially, then moved to Alabama in 2003 and moved back to Lampasas in 2013. He served in the United States Air Force and was a veteran of the Korean war. Jack and his wife Doreen ran Granny M’s Ice Cream Shop in Lampasas for several years. Jack was a member of the NRA. He loved to dove hunt and fish, when his family heard him say, “Bass are runnin’!”, they would know that he was headed to the river to fish for white bass. He was an early computer programmer, putting together computers at West Fort Hood during the late 60’s and early 70’s where he was stationed in civil service, retiring in 1989 as a GS14. He was a kind and generous man and loved by all. Jack is preceded in death by his parents, one brother, Clifford Morris, and one sister, Mildred Grider. Survivors include his wife, Doreen Morris of Lampasas, one son, Dennis Morris (Betty) of Burnet, Texas, two daughters, Cheryl Wessels of Pflugerville, Texas, and Roxanne Griffin (Ronnie) of Lampasas, two sisters, Josephine Stewart of Scottsboro, Alabama and Earlyne Rorex of Tucson, Arizona. Grandchildren are Lisa Mainey of Florida, Dennae Stooksbury of Austin, Justin Wessels of Austin, Margaret Malloy of Pidcoke and Ginger Griffin of Lampasas. There are 12 great grandchildren and one great-great grandchild. Numerous nieces and nephews also survive. The graveside service for Mr. Morris will be held at 1:00 PM on Thursday, April 8, 2021 at Oak Hill Cemetery in Lampasas, Texas. Funeral Arrangements are entrusted to Heritage Funeral Home of Lampasas, Texas.

Baskum (Jack) Earl Morris, 87 passed away at his residence in Lampasas County on April 5, 2021. He was born in Scottsboro, Alabama on April 26, 1933 to Baskum and Ada Eakin Morris. He and Doreen Kureger were married in Copperas Cove, Texas... View Obituary & Service Information

The family of Jack Morris created this Life Tributes page to make it easy to share your memories.

Baskum (Jack) Earl Morris, 87 passed away at his residence in...

Send flowers to the Morris family.