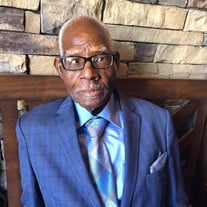 JB "Nootie" Walton was born in Melvin, Texas, to the late Pos Basped, Sr. and Iola McGarity. He was the second eldest of 11 children. JB Walton was a hard-working, kind-hearted and loving person. At the tender age of 7 years old, he accepted Christ and became a faithful member of St. James Baptist Church in Brady, Texas. Shortly thereafter, he began a 70-plus year career of working on farms, landscape, construction and for municipalities all across the great state of Texas. Although he retired from the city of Kermit in the 1980s, he continued to work for various ranchers throughout West Texas until the early 2000s. A devoted family man, he frequently visited his grandchildren in Dallas and Odessa where he was always the life of the party. As an act of love and support for his family and friends, he attended birthday parties, football games, church services, family reunions, weddings and various events. While working or at a dinner table, he could often be heard singing hymns and praises to the Lord. He loved fishing, singing, dancing, telling jokes and reciting poems. His age didn't slow him down. JB was blessed to live a full, long life until the day of his departure. By record, he was the oldest living person in Brady at the time of his death. JB was affectionately known as Granddaddy to his grandchildren, Nootie to his family or close friends and Mr. Walton to the community. He loved his grandchildren, family and community beyond measure. JB Walton was preceded in death by his loving wife Lorita Walton and only son, James Dobbins, Jr. He is survived by his last living sister Mandie Houston of Seagraves, Texas; his grandchildren Vielica Dobbins, Kale Dobbins, Jochon Dobbins, Venshard Dobbins Sr. and Danielle Dobbins; nine great grandchildren and one great-great grandchild; and a host of nieces and nephews. Funeral arrangements are entrusted to Heritage Funeral Home of Brady.

JB "Nootie" Walton was born in Melvin, Texas, to the late Pos Basped, Sr. and Iola McGarity. He was the second eldest of 11 children. JB Walton was a hard-working, kind-hearted and loving person. At the tender age of 7 years old, he accepted... View Obituary & Service Information

The family of Mr J.B. Walton created this Life Tributes page to make it easy to share your memories.

JB &quot;Nootie&quot; Walton was born in Melvin, Texas, to the late Pos...

Send flowers to the Walton family.