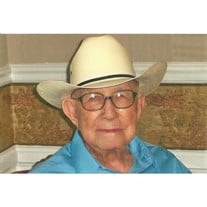 J. H. Slaughter, 92, of Brady, Texas, passed away Monday, November 4, 2013, in San Angelo. Visitation will be held from 5 - 7 p.m., Wednesday, November 6, 2013, at Heritage Funeral Home in Brady. Funeral services will be held at 2 p.m., Thursday, November 7, 2013, at First Baptist Church in Brady with burial to follow at Rest Haven Cemetery. J.H. was born on March 31, 1921, in Brady, Texas, to Ross Hill Slaughter and Alta Bell Kirklen, and was a lifetime resident of McCulloch County. He served three years with the US Navy in the South Pacific during World War II. He married Edith Bratton Boswell on March 30, 1974, in Brady. He was a member of the First Baptist Church in Brady where he had been a Deacon for years. J.H. had been a truck driver prior to entering the military and returned to that profession after his discharge from the Navy. Through the years he drove for several different companies, hauling everything from gas to cattle to sand. He made short haul runs and those that took him across the country. He was preceded in death by; his parents and one stepdaughter, Mary Ann Roper. Survivors include; wife, Edith Slaughter, of Brady; three stepsons; Billy Weir of Midland; John Weir of Kaufman; and Knox Trammell, Jr., of Kingsville; one stepdaughter; Mary Jo Lanford of Elgin; one sister Anna Mae Jenkins of Coleman; and was "Papa J" to; 16 grandchildren; 31 great-grandchildren; 5 great-great grandchildren; numerous nieces and nephews.

The family of J H Slaughter created this Life Tributes page to make it easy to share your memories.

Send flowers to the Slaughter family.