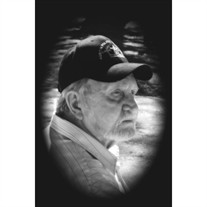 Houston Roy (Chadwick) McCoy was called to heaven on December 27, 2012. Houston was born January 28, 1940 in a three room farm house, a mile down river from Menard, Texas to Edith Louise Davis and Bill Chadwick. In 1947 he became the adopted son of Les McCoy. Growing up, Houston was active in Boy Scouts and was a member of the Episcopal Church serving as Altar Boy and Lay Reader. In 1958, he graduated from Menard High School where he was an honor student, class president, star athlete, named Best All Around Boy and voted Class Favorite. After attending college at Lamar Tech in Beaumont for six months on a basketball scholarship, he decided to join the United States Army. In 1959, he was stationed near Stuttgart, Germany and was a member of a non-English speaking German Glider Flying Club, where he successfully soloed after only five hours of training. It was during this time that Houston met his beautiful future wife, Ruth Annemarie Gebhart. Houston and Ruth became engaged in November 1961, before he rotated back to the States for an honorable discharge in March 1962. With two dollars in his pocket, he hitch hiked from Menard to Austin, Texas where in May 1963 he gained employment as a city policeman for the Austin Police Department. Houston was able to send for his fiancée sixteen months after having left Germany and they married July 20, 1963 the day after the police commissioning ceremony. In 1967, Houston received the Austin Police Medal of Valor for his actions in subduing a sniper atop the University of Texas tower, consequently ending the tragic events that transpired August 1, 1966. After leaving the police force in 1968 for a higher paying job, he was employed as a civilian flight instructor for the United States Air Force in Del Rio, Texas where he taught USAF Cadets and other military cadet students from various nations to fly T-41A Mescalero primary trainer airplanes. In January 1975 he accepted the position of Camp Ranger at Boy Scout Camp Sol Mayer near Ft. McKavett, Texas. Houston was preceded in death by Ruth on December 15, 2011 and youngest sister Dawn on July 29, 2006 and is survived by his four children, Kristofer, Stefan, Philip, and Monika; sisters, Susie and Leslie; daughter-in-laws, Jacqueline and Anna; grandchildren, Joshua, Chelsea, Robert, Megan, Justin, and Syrlena, Jessica and Rafael; nieces and nephews, Davee, Dora, Paul, Hailey, and Trevor. Services will be held in Menard, Texas on January 03, 2013 at 1:00 p.m. at First Baptist Church with Austin Police Department Chaplain Rick Randall officiating, followed by a reception at the American Legion.

Houston Roy (Chadwick) McCoy was called to heaven on December 27, 2012. Houston was born January 28, 1940 in a three room farm house, a mile down river from Menard, Texas to Edith Louise Davis and Bill Chadwick. In 1947 he became the adopted... View Obituary & Service Information

The family of Houston McCoy created this Life Tributes page to make it easy to share your memories.

Houston Roy (Chadwick) McCoy was called to heaven on December...

Send flowers to the McCoy family.