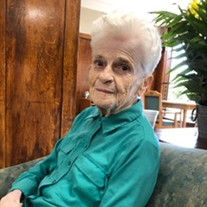 Helen was born to Roy and Margaret Bradford Benson on December 20, 1931, in the house of her maternal grandparents on Gay Street in Menard. She and three sisters grew up together in play, in school, and family reunions. In later years with husbands and families, they remained close in spirit and enjoyed time together. Helen's early years and summers were on the ranch where she participated in many ranching chores: riding horseback for fun and to herd sheep and goats, stacking Prickly pear, opening gates for her Dad, and helping bale hay, mostly not for fun. In the middle of her first grade at Ellis School near the ranch, the family moved to town. Helen entered Mrs. Crabb's 1st Grade in Menard where Jakie Landers was already a student. Her family lived in a house across the street from the school and in their backyard were chickens, a milk cow, later on a 4-H pig named Rosie, and a horse she often rode down Gay Street to piano practice. Helen played a cornet in the band and was active in sports and school dances. The high school burned down in her junior year, but with summer school and correspondence courses she graduated early and entered Hendricks Nursing School with money from Rosie's litter. She became a Registered Nurse in 1952 and began working in Labor and Delivery at Hendricks. Helen was a very capable nurse working through the years at the Clinic Hospital in San Angelo as Supervisor of Obstetrical Care, in St Joseph's in Bryan in newborn intensive care, Alta Bates Hospital in Oakland California in newborn and intensive care, Mary Greely Hospital in Ames, Iowa, as Supervisor of Newborns, in Carlsbad at the MHMR State School and in San Angelo in Home Health and Hospice. She married Jake (Roger Q Landers, Jr.) in the First Baptist Church in Menard on June 4, 1954 and shared with him graduate school at Texas A & M and California and Army at Ft. Eustis, Virginia. Roger was born June 15, 1956 in Virginia and Amy was born September 24, 1959. Helen came to Menard Manor in 2012 and Jake joined her the next year in adjoining rooms. They were often seen with Helen walking and him in his wheelchair or scooter going to the bank, library or courthouse or riding in the pickup to the orchard or ranch. Helen leaves behind her husband of 66 years, sister Mildred Yates, son Roger & wife Karen, daughter Amy and husband Jon Ness, grandchildren Matt & Katie Ness, Drew & Nicki Ness, Michelle & Tyler Kubik, nine great grandchildren and many nieces and nephews. Helen wanted gifts going to Hospice of San Angelo (HOSA). Funeral service will be held at 10:00 AM Saturday, June 12, 2021, at Heritage Funeral Home of Menard with the Marga Bolding Simmons, officiating. Funeral arrangements are entrusted to Heritage Funeral Home of Menard. Please view Mrs. Landers' online memorial at www.heritagefuneralhome.com

Helen was born to Roy and Margaret Bradford Benson on December 20, 1931, in the house of her maternal grandparents on Gay Street in Menard. She and three sisters grew up together in play, in school, and family reunions. In later years with husbands... View Obituary & Service Information

The family of Helen Landers created this Life Tributes page to make it easy to share your memories.

Helen was born to Roy and Margaret Bradford Benson on December...

Send flowers to the Landers family.