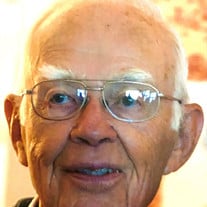 Fred Harold Lockwood was born May 03, 1922, in Brownwood, Texas to Etha Lula and Charles Commodore Lockwood and passed away at home on March 20, 2022. He is pre-deceased by his wife of 69 years, Marguerite Lockwood, and survived by three children, Margie Marek (David), Patricia Partain (Jimmy) and Fred Lockwood (Carol), four grandchildren, Zachary Lockwood (Beth), Rebecca Hardy (Tim), Lauren Ott (Michael) and Peyton Marek (Kait), and nine great-grandchildren. A memorial service to celebrate his life will be held at 1:00 PM Saturday, March 26, 2022, at First United Methodist Church in Brownwood, Texas under the direction of Heritage Funeral Home, Davis-Morris Chapel. A private family service will be held at Eastlawn Memorial Park. Memorial gifts may be given to the Brownwood Kiwanis Club or First United Methodist Church of Brownwood. Harold graduated from Brownwood High School in 1939 and Virginia Military Institute in 1946. He was in the VMI class of 1944, but after his junior year his class joined World War II where he served in the Pacific theater. He completed his senior year after the war. He and his brother, Charles T. Lockwood, operated the Brownwood Dr. Pepper business until his retirement. Harold had a ranch in Brown County and greatly enjoyed his time there raising cattle and seeing his children and grandchildren enjoy the outdoors. He also enjoyed playing golf. He was active in Good Samaritan Ministries and in the Brownwood Kiwanis club where he served as the local district lieutenant governor. He prided himself as the most prolific seller of tickets to the annual Kiwanis pancake supper, an accomplishment that he took over from his father. Harold and Marguerite served their church, First United Methodist, as greeters for almost 50 years. Harold was active in many committees in the church and was one of many instrumental in the construction of the church facility at its current location. He was a kind, honest and faithful friend to many, and loved and cherished his family. He will be greatly missed. The family extends their thanks and gratitude to the many kind and faithful caregivers who helped care for Harold, with special thanks to Esther Ochoa. Services entrusted to the care of Heritage Funeral Home, Davis-Morris Chapel. Friends and family are encouraged to view the online memorial at www.heritagefuneraltx.com.

Fred Harold Lockwood was born May 03, 1922, in Brownwood, Texas to Etha Lula and Charles Commodore Lockwood and passed away at home on March 20, 2022. He is pre-deceased by his wife of 69 years, Marguerite Lockwood, and survived by three children,... View Obituary & Service Information

The family of Harold Lockwood created this Life Tributes page to make it easy to share your memories.

Send flowers to the Lockwood family.