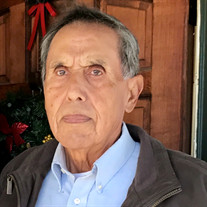 Guadalupe "Lupe" Castaneda, age 84, of Brownwood, went home to be with his Lord on Thursday, January 27, 2022. He was born in Villa Union Coahilla, Mexico, on December 6, 1937, the son of Pascual and Delfina Castanada. He married the love of his life, Maria Castillio, on May 13, 1959, in Mexico. He moved to Texas to work for Jack Shelton on the Shelton Ranch and later moved his wife here to be with him. He later worked for Superior Cable and then as a maintenance worker at Texas Bank. He was a very active member and deacon at the First Mexican Baptist Church in Brownwood. He was known as a very dedicated hard worker and a very loving and strong caring man. His favorite things to do was work in his garden and spending time with his grandchildren. He loved keeping and maintaining the church grounds. Guadalupe loved God and shared his love with his family and those who crossed his path. His memory will always remain in his familie's hearts. He is survived by his wife, Maria Castaneda, his sons, Rudolfo Castaneda, Roberto Castaneda, and Jose (Joe) Castenada. He was known as "Tito" to his five loving grandchildren, Stacey, Melisa, Priscilla, Mark and Carlea, and his great-grandchildren, Allyson, Nathanuel, Mitchell, Trystan, Felicity Hope, Levi, and Omri, and great-great-grandchildren, Noah, Jonah, and Skarlett. Funeral services will be held Monday, January 31, at 2:30 PM at the Primera Iglesia Bautista Church on Melwood Street with Margarito Barboza officiating. Visitation will be held on Sunday evening from 6-8 at the Davis-Morris Chapel of Heritage Funeral Home. Burial will follow in the Greenleaf Cemetery. Services entrusted to the care of Heritage Funeral Home, Davis-Morris Chapel. Friends and family are encouraged to view the online memorial at www.heritagefuneraltx.com.

Guadalupe "Lupe" Castaneda, age 84, of Brownwood, went home to be with his Lord on Thursday, January 27, 2022. He was born in Villa Union Coahilla, Mexico, on December 6, 1937, the son of Pascual and Delfina Castanada. He married the love of... View Obituary & Service Information

The family of Guadalupe Castenada created this Life Tributes page to make it easy to share your memories.

Send flowers to the Castenada family.