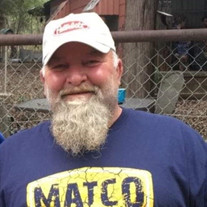 George Michael Gault, age 60, of Lake Brownwood passed away Wednesday evening, October 13, 2021, with his family by his side. He was born December 27, 1960, in Little Rock, Arkansas, the son of George Lee Gault and Loretta Moore Gault. Following graduation, he served as a rifleman in the U. S. Marine Corp. He was married to Natalie Jackson. He worked as a diesel mechanic at G's Truck Shop in Coleman and had been a mechanic for over 40 years. He had been a resident of Brownwood for the past 33 years. He was a believer of Jesus Christ. He enjoyed gunsmithing and collecting guns and knives. He especially enjoyed being outdoors and hunting. His main love was his family whom he enjoyed spending time with. He is survived by his wife, Natalie Sue Gault of Lake Brownwood, his mother, Loretta Gault of Arkansas, three daughters, Jessica Huggins and husband Josiah of Jarrell, Texas, Tabatha Gault of Lufkin, Texas and Heather Sisson and husband Kasey of Jarrell, Texas, two sons, Robert Welch and wife Mickay of Dripping Springs, Texas, and Beau Gault and wife Meredith of Lufkin, Texas. He also was blessed with thirteen grandchildren, Andriana, Hunter, Zaylee, Trinity, Kennan, Trennan, Destiny, Brayden, Payten, Ashlyn, Savannah, Nevaeh, and Daisy as well as four great-grandchildren, Trey, Jax, Ryker, and Amir. He also has two sisters, Rhonda Kruhler of Oregon, and Belinda Reynolds of Arkansas. He was preceded in death by his father, George Lee Gault. He will be cremated under the direction of Heritage Funeral Home, Davis-Morris Chapel in Brownwood. A memorial service will be held at 2 pm on Saturday, October 23, in the Davis-Morris Chapel of Heritage Funeral Home of Brownwood with a family, friends, and food gathering following at Riverside Park. Friends wanting to make memorial donations, please make them through Venmo, Natalie [email protected] Funeral services have been entrusted to the care of Heritage Funeral Home, Davis-Morris Chapel in Brownwood. Friends and family are encouraged to view the online memorial at www.heritagefuneraltx.com.

George Michael Gault, age 60, of Lake Brownwood passed away Wednesday evening, October 13, 2021, with his family by his side. He was born December 27, 1960, in Little Rock, Arkansas, the son of George Lee Gault and Loretta Moore Gault. Following... View Obituary & Service Information

The family of George Michael Gault created this Life Tributes page to make it easy to share your memories.

Send flowers to the Gault family.