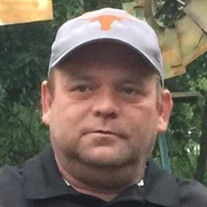 Gary Eugene Gant, 50, of Lampasas died December 23, 2021 at Metroplex hospital in Killeen, Texas. He was born January 7, 1971, in Austin, Texas to Charles Gant and Maryann Fields. He lived all of his life in Lampasas and attended Lampasas High School. He married Catherine Cook on November 7, 2011. During his life he was a painter, a plumber, and a handyman. He was a member of the New Covenant Church of Lampasas and volunteered his time there working on things such as construction of the new day care center and other projects where his help was needed. He accepted Christ into his life on October 13, 2019 and had been actively involved with the Church since that time. He is survived in death by his wife, Catherine Gant of Lampasas, one son, Gary Gant, and wife Hillary of New Braunfels, one stepdaughter, Courtney West of Lampasas, parents Maryann and Bobby Fields of Lampasas and Charles and Kay Gant of Leakey, one sister, Jennifer Bunting, and husband Jerry of Lampasas, one brother, Brandon Fields, and wife Tara of Lampasas, one stepbrother, Roman Vaughn, and wife Beverly of Luling, two stepsisters, Julie Blair, and husband Jon of Flatonia, and Heather Smith, and husband Mike of Flatonia. He is also survived by four grandchildren, one uncle, and numerous nieces, nephews, aunts, and cousins. He was preceded in death by his grandparents and one uncle. Gary is also survived by his Brothers in Life, Craig Groves, Mike Harbin, Frank “Eddie” Johnson, David Wamsley, Warren Badger, Brandon Fields and Roman Vaughn. A celebration of life will be held on Wednesday, December 29, 2021, at 1:00 pm in Lampasas at the New Covenant Church. Pastor Darrell Feemster will preside over the service. Arrangements are entrusted to Heritage Funeral Home of Lampasas.

Gary Eugene Gant, 50, of Lampasas died December 23, 2021 at Metroplex hospital in Killeen, Texas. He was born January 7, 1971, in Austin, Texas to Charles Gant and Maryann Fields. He lived all of his life in Lampasas and attended Lampasas... View Obituary & Service Information

The family of Gary E. Gant created this Life Tributes page to make it easy to share your memories.

Send flowers to the Gant family.