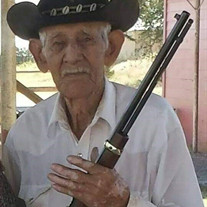 Francisco F. Sandoval passed away at his home on January 28, 2022, at the age of 94. He was born in Melvin, Texas on October 10, 1927, to Luis Sandoval and Petra Fernandez. He was the oldest of six children. He was raised in Melvin. He began working for local farmers and ranchers at the young age of eight after the death of his father. He helped his mother support his siblings with whatever job he could get. He was known throughout his life as a hard worker throughout his life. In 1951 he married Elisa Castanuela, they began their lives in Melvin and started their family of ten. They later moved to Valdina Farms in Utopia, Texas where he worked as a Rancher for nineteen years. That did not end his career, he continued taking different jobs working at a McBee's BBQ and then working at the McBee's Beverage Barn in Hondo, Texas; while still taking jobs building fence and any jobs that was offered to him. He never turned down work if it ment supporting his family. He lived in D'Hanis, Texas for many years, but eventually made his way back home to Melvin. He worked for the City of Melvin until he retired but was always willing to lend a helping hand whenever needed. He is proceeded in death by his parents, his brother Luis Sandoval Jr., his sisters Irene Castanuela and Belia Castanuela, his daughters Beatrice Sandoval and Maria Louisa Sandoval, and his sons Robert Sandoval and Frankie Sandoval. He is survived by his children Helen S. Zamora Unyebadou and husband Uche from Brady, Texas, Sylvia S. Silva from Melvin, Texas, Louis Sandoval from Fredericksburg, Texas, Josephine S. Castillo from Melvin, Texas, Elizabeth S. Stephenson and fiancé Kevin Ullrich from Melvin, Texas and Michael Sandoval and wife Lynn from Brady, Texas, his brother Efrian Sandoval from Roswell, New Mexico and sister Herminia S. Felan from McGregor, Texas. He is also survived by twenty-one grandchildren, twenty-one great-grandchildren, three great-great-grandchildren. Visitation will be held Friday, February 11, 2022, from 6:00 - 7:00 PM and Rosary from 7:00 - 8:00 PM at Heritage Funeral Home of Brady. Funeral service will be held Saturday, February 12, 2022, at 10:00 AM at St. Francis Xavier Mission in Melvin with Father Terry Brenon, officiating. Burial will be at Melvin Cemetery. Funeral arrangements are entrusted to Heritage Funeral Home of Brady. Please view Mr. Sandoval's online memorial at www.heritagefuneralhomes.com

Francisco F. Sandoval passed away at his home on January 28, 2022, at the age of 94. He was born in Melvin, Texas on October 10, 1927, to Luis Sandoval and Petra Fernandez. He was the oldest of six children. He was raised in Melvin. He began... View Obituary & Service Information

The family of Francisco F Sandoval created this Life Tributes page to make it easy to share your memories.

Francisco F. Sandoval passed away at his home on January 28,...

Send flowers to the Sandoval family.