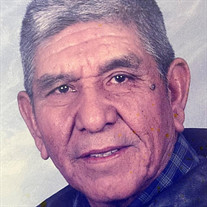 Felix Niaves Zapata was born April 10, 1937, in Mason, Texas to Gregorio & Maria Zapata, Sr. Felix passed away on April 11, 2022, at his home, peacefully, surrounded by his family. He grew up in Brady, Texas with his brothers, sister and numerous family and friends. On February 15, 1964, he met the love of his life, Elia Vargas. They married May 15th of that same year and were married for 57 years. After marrying Elia, they moved to Menard, Texas where he worked as a sheepshearer for several years. He later became a truck driver at the sand plants in Brady/Voca Texas. He later retired and being the "Jack-of-all-trades," that he was, worked in his garden, on his home, and built any and everything that his grandchildren wanted. He is survived by his wife, Elia, children, Sonya Robles and husband, Lionel, Jr; Elario (Larry) Zapata and wife Rosario; Debbie Contreras, thirteen grandchildren, DJ, Vincent, Raque, Magdalena, Mariella, Alejandro, Daniela, Miguel, Rose, Jonathan, Darion, Nicholas, and Sam Jr., and thirteen great-grandchildren. Sister-In-Law, Alvina Ledezma, brothers: Manuel Zapata, Sr. & wife Esperanza, John Zapata & wife Anna, and Roman Zapata. He was preceded in death by his parents, brothers, Guadalupe, Madaleno, Gregorio, Jr, Jesus and Jose Zapata. Sisters, Lidia Chapa, Juanita Zapata and Adelina Zapata and son, Sam Ramos, Sr. Funeral services will be in Menard, Texas with Rosary on Wednesday, April 13, 2022, at Heritage Funeral Home in Menard, Texas at 6:00 PM. Funeral Mass on Thursday, April 14, 2022, at Sacred Heart Catholic Church at 12:00 noon. Interment will be at Garden of Memories following the Mass. Pallbearers are: Robert Zapata, Gabriel Zapata, Modesto Zapata, Adan Zapata, Sergio Zapata, and Manuel Zapata, Jr. The Zapata, Contreras, Ledezma & Robles families wish to extend their gracious gratitude to Hospice of San Angelo, numerous family and friends that supported the family through this difficult time. Memorials may be made to Hospice of San Angelo, Texas. Funeral arrangements are entrusted to Heritage Funeral Home of Menard. Please view Mr. Zapata's online memorial at www.heritagefuneralhome.com

Felix Niaves Zapata was born April 10, 1937, in Mason, Texas to Gregorio & Maria Zapata, Sr. Felix passed away on April 11, 2022, at his home, peacefully, surrounded by his family. He grew up in Brady, Texas with his brothers, sister and numerous... View Obituary & Service Information

The family of Felix Zapata created this Life Tributes page to make it easy to share your memories.

Send flowers to the Zapata family.