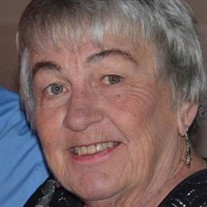 Elsie Arlene Maserang passed away at her home Sunday, January 12, 2020. Elsie was born July 10, 1942 in San Angelo, TX to Lela Beatrice (“Bea”) and Sam Cochran. After Sam’s death in 1949, Bea met and married James Leo Layton, who adopted, loved, and raised Elsie. Elsie graduated Menard High School in 1960 and married Clinton Pierce (Henry’s future husband-in-law) in January 1961. Their son (and Elsie’s favorite), Rex Dwain was born in 1963, followed by Kelly Lynn (Clinton’s favorite) in 1966. Elsie and Clinton divorced in January 1979, and a great friendship was born. Elsie met the love of her life, Henry Edward Maserang, when they worked together (actually, he was her boss) at a lingerie factory in Cisco, TX, and began dating in 1981. They were known to stop the car and dance in the middle of the road if a good song came on the radio. Elsie and Henry married in September 1983 in Menard, and this crazy, loving circus of a family was born. Elsie was a wife, mother, and seamstress, among many other jobs, but worked most of her career as the Deputy and County Clerk of Menard County from 1987 to 2007. She enjoyed participating in the Song of Silver play during the Jim Bowie Days Celebration, whether she was sewing costumes for the saloon girls or playing the madam of the brothel. She also took great joy in sitting in the stands on Friday nights cheering on the Menard Yellowjackets and helped create and administer the Menard Ex-Student Association. Elsie was preceded in death by her parents Sam Cochran and James & Bea Layton and many aunts, uncles, and cousins (who were more like siblings than cousins). She is survived by her husband Henry, children Rex Pierce & wife Leigh Ann, Kelly Pierce, Pam Ramirez, Henry Maserang, Jr. & wife Sherri, and Nita Wallace & husband Josh; grandchildren Gus Lutjens & fiancé Eva Froese, Docia Lutjens, Byron Pierce & wife Cristina, Samantha Sutherland & husband Adam, Amy Callaway & husband Clay, and Mackenzie Maserang & fiancé Britt Thomas; great-grandchildren Logan and Mason Pierce, Kennedy Callaway, and Luke Sutherland; an aunt, Naomi Etheredge, along with many cousin-siblings and friends.

The family of Elsie Arlene Maserang (Layton) created this Life Tributes page to make it easy to share your memories.

Elsie Arlene Maserang passed away at her home Sunday, January...

Customized sympathy cards. Mailed for you.