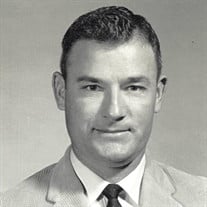 Earl Wesley Behrens went to be with his Lord on Friday, March 20, 2020. He was greeted by the love of his life, his wife Grace, who preceded him in death a mere 6 months before. Earl was born December 8, 1928, the only son of J.W. and Myrtle Fleming Behrens and raised in Voca, along with his 4 sisters: Pauline Chambers (deceased), Maxine Naylor of Smithville, Texas, Anna Williams (deceased) and Frances Canon (deceased). The family has spent many generations in the Mason County and McCulloch County area, the Behrens ancestors having emigrated from Germany to Texas to participate in the Fischer-Miller land grants. His love of farming was instilled early, inspiring him to attend Tarleton State College and Texas A & M College to earn his Bachelor of Science Degree in Agricultural Education, and later his Master’s Degree from Howard Payne University. It was at Tarleton that Earl found his lifelong love, Grace Meador. They married and he took the job of opening an Agriculture curriculum at Zephyr High School. He then spent years teaching Agriculture at Brady High School and at Brownwood High School. The young people that he taught and inspired are only part of Earl’s widespread legacy. For several years he taught for the A & M Ag Ed Extension service, as a swine specialist, educating adults throughout the State of Texas. Earl’s love of farming brought him back to Voca, where he and his son, Joe, were partners for many decades in peanut farming, along with swine and cattle operations. Dedication to the profession involved him in the Farm Bureau from the beginning, and for that leadership, he received their Pioneer Award for Exceptional Service. His award from the USDA was for his many years of service to the McCulloch County Farm Service Agency. The Texas Association of Future Farmers of America awarded him the Honorary Lone Star Farmer degree for his activities with their group. Serving his Lord and Savior was a driving force in Earl’s life. He was a deacon at Liberty Baptist Church in Voca. Plus, being a leader in both the Emmaus movement and in the Gideons was a labor of love to him. As Earl was fond of saying that he had 2 of the best women ever in his beloved mother, and in Grace. Before her passing, Grace and Earl had enjoyed over 68 years of blessings together. At the drop of the hat, Earl would retell the story of their meeting and their courtship and of how Grace’s mother really liked him! He is survived by his children Joe Wesley and wife Jacquelyn Behrens, of Voca, and Rhonda Bosquez and husband Robert, of Corpus Christi, along with 5 grandchildren Jenna Pool (McLain) of Stratford, Texas, Andrew Bosquez (Chrissy) of Killeen, Texas, Jay Behrens (Morgan) of New Braunfels, Texas, Jonathan Bosquez (Victoria) of San Antonio, Texas and Joshua Behrens, also of San Antonio. In addition, he is survived by 9 great grandchildren. The family would like to thank Faye Revada, Mary Helen Routt, Elaine Nandin, and Mary Reyes for their 4 years of dedicated care of Earl and Grace. There will be a staggered visitation at the Heritage Funeral Home in Brady, on Friday, March 27, 2020, 6:00-8:00 pm. At a later date the family plans a memorial service to celebrate Earl’s life and legacy. Memorial contributions can be made to Liberty Baptist Church, PO Box 89, Voca, Texas 76887. Funeral arrangements are entrusted to Heritage Funeral Home of Brady.

Earl Wesley Behrens went to be with his Lord on Friday, March 20, 2020. He was greeted by the love of his life, his wife Grace, who preceded him in death a mere 6 months before. Earl was born December 8, 1928, the only son of J.W. and... View Obituary & Service Information

The family of Earl Wesley Behrens created this Life Tributes page to make it easy to share your memories.

Earl Wesley Behrens went to be with his Lord on Friday, March...

Send flowers to the Behrens family.