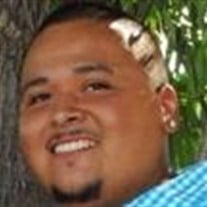 Dustin Marc Coronado, 28, passed away Friday January 17, 2020, in Temple, Texas surrounded by his family after a long battle with Cancer. Dustin was born February 17, 1991, in Llano, Texas to Diana (Coronado) and Marcos Ramos. Dustin was a graduate of San Saba High School (Class of 2011) and Universal Technical Institute (Class of 2012). After graduating college in Houston, Texas, Dustin returned to his hometown of San Saba, Texas to be closer to family. He began working at Hamrick’s Automotive and there he had a work-family that supported him. In 2011, Dustin met Marisa Hernandez they were married August 22, 2015, and had 4 beautiful daughters: Christina, Selenda, Ximena, and Evelyn. In addition to spending time with his family, Dustin had a passion for winning races, and making trucks fast and loud. Dustin had a funny, joking personality and was always making friends and family laugh. He touched many lives with his sense of humor. He is survived by his parents Diana and Marcos of Mexico, his wife Marisa and four daughters, Christina, Selenda, Ximena, and Evelyn, brother, Hector Martinez and his wife Esther, sister, Maloree Ramos all of San Saba , grandparents, numerous nieces and nephews, aunts, uncles, and cousins. Dustin is preceded in death by his grandfather Jesus Ramos and cousins Ramiro Ramos Jr. and Jonathon Ramos. Recitation of the Holy Rosary will take place Monday, January 20, 2020 at Heritage Funeral Home in San Saba, Texas at 7:00 PM. Mass of Christian Burial will be held Tuesday, January 21, 2020 at 2:00 PM at St. Mary’s Catholic Church in San Saba, Texas. Burial will follow at San Saba City Cemetery. Arrangements entrusted to Heritage Funeral Home of San Saba. Please visit online tribute center at https://www.heritagefuneraltx.com/

Dustin Marc Coronado, 28, passed away Friday January 17, 2020, in Temple, Texas surrounded by his family after a long battle with Cancer. Dustin was born February 17, 1991, in Llano, Texas to Diana (Coronado) and Marcos Ramos. Dustin was a... View Obituary & Service Information

The family of Dustin Marc Coronado created this Life Tributes page to make it easy to share your memories.

Send flowers to the Coronado family.