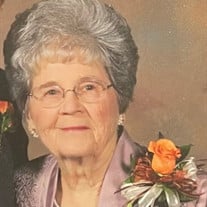 Dorothy Juanice Karnes-Davidson went to be with the Lord on September 11, 2021. Juanice, as everyone knew her, was born on October 18, 1929 to Cleveland H. and Martha "Mattie" Karnes in San Saba, Texas. There she married Billy R. Davidson on May 4, 1947. Bill and Juanice were married for 74 years, living their whole life together in their hometown of San Saba and raising one daughter, Sharon Kay. Juanice worked alongside her husband, Bill, at their local family grocery store, Davidson's Grocery. Juanice was a homemaker, business woman, Sunday school teacher, longtime member of the San Saba Church of Christ, 4H leader, and at one time, was a member of the San Saba Garden Club. But the title she cherished most, was Memaw. Juanice had one son-in-law Rick, whom she respected and appreciated, two grandchildren, Tracy and Lee, whom she adored and cherished, but it was her four great-children: Brandon, Rebekah, Korie, and Weston, that were her world. In addition to her immediate family, Juanice had a very special relationship with her nieces and nephews. At times, Juanice felt almost a motherly instinct over them. Juanice had nine sisters and two brothers. Growing up as one of twelve children, the philosophy "It takes a village." was lived out in her family daily. Juanice was a hard worker throughout her life. To make extra money to buy whatever, beautiful something, she had her heart set on, Juanice would gather pecans for Riley Harkey in his orchards. Her work ethic and tenacity is carried out today through the hard working spirit of her daughter and all of her family. Juanice was strong-willed and straight forward, but had such a soft spot when it came to children. One of her greatest joys in life for many years, was teaching Sunday school at the 2nd and Wallace Church of Christ. Many young girls and boys learned the Bible stories that she passionately told every Sunday. Two very special students brought her such joy during this time, Colt and Chase McCoy. Juanice had such pride in watching these young men, that she had taught in Sunday school, go on to succeed on the football field of the University of Texas. So much so, that she forced the family to be Longhorn fans from listening to story after story of Colt and Chase. Juanice was passionate, strong, hardworking and tough, her strength was drawn from her relationship with the Lord. Even in the days after she could no longer attend church, due to physical limitations, she made sure that she and Bill would partake of communion each Sunday from their kitchen table. You would rarely enter the backdoor of her home and not see a Bible on the dining room table and in later years, when her eyes gave out on her, you could hear the cassette tape recording reading the Bible to her. To Juanice, family was everything. Her love for her family was undeniable. Her pride in their accomplishments, successes and achievements were never questioned. Juanice is survived by her husband Billy R. Davidson, daughter Sharon Kay Pierce and her husband Rick, granddaughter Tracy Renton and her husband Neil, grandson Lee Pierce and his wife Terra, four great-grandchildren, Brandon and Rebekah Renton, Korie and Weston Pierce, all of Midland, Texas, one sister Charlie Henry of Brownwood, Texas, and many nieces and nephews. She is preceded in death by both her parents, Cleveland and Mattie Karnes, 2 brothers and 9 sisters.

Dorothy Juanice Karnes-Davidson went to be with the Lord on September 11, 2021. Juanice, as everyone knew her, was born on October 18, 1929 to Cleveland H. and Martha "Mattie" Karnes in San Saba, Texas. There she married Billy R. Davidson on... View Obituary & Service Information

The family of Dorothy Juanice Davidson created this Life Tributes page to make it easy to share your memories.

Dorothy Juanice Karnes-Davidson went to be with the Lord on September...

Send flowers to the Davidson family.