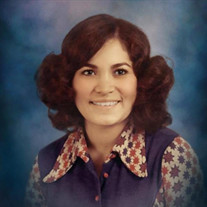 Dolores Irma Benoist, 66, of Lampasas, Texas died on Sunday, July 18, 2021, at Lampasas Nursing and Rehabilitation Center. Dolores was born on Tuesday, July 27, 1954, in Tucson, Arizona to Oscar and Juanita (Hernandez) Gonzales. She moved to Lampasas as a small child and continued to live here for her entire life. Dolores married Benny Benoist in 1996 in Lampasas, Texas. Dolores had worked in the Human Resources Department at the State of Texas for several years. She loved to cook and bake. Dolores is survived by her husband, Benny Benoist of Lampasas, two sons, Keith Jones (Heather) of Lampasas, Mark Jones (Kayla) of Lampasas and one stepson, Branden Benoist (Amanda), of Copperas Cove, two daughters, Liz Jones Newman of Lampasas, Christie Fortner (Jason) of Lampasas and one stepdaughter, Cayla Windish (Mike) of Lampasas. Also surviving are four sisters, Susan Sanchez (David) of North Carolina, Sally Salinas of Lampasas, Sara Villareal (Chris) of Austin, and Teresa Gonzales Sanchez (Hondo) of Lampasas. Dolores has 19 grandchildren and three great-grandchildren. She is preceded in death by her parents and by one sister, Adela Gonzales. There will be a visitation for Dolores on Friday, July 23, 2021, from 5:00 PM – 7:00 PM at Heritage Funeral Home in Lampasas. Arrangements are entrusted to Heritage Funeral Home of Lampasas.

The family of Dolores Irma Benoist created this Life Tributes page to make it easy to share your memories.

Send flowers to the Benoist family.