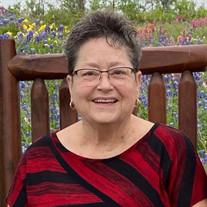 Debra Pearl Sikes (Beal) “Nana”, age 66, resident of Early, Texas, went home to be with the Lord on the afternoon of Thursday, July 15, 2021. Debra’s kind soul came into this world in Coleman, Texas, on December 11th, 1954, as the second of three children to Timothy Lewis Beal and Leona Pearl Wells. Debra attended school and graduated from Blanket High School in 1973. In high school, Debbie played basketball, ran track, and was a cheerleader. After high school, Debra married the love of her life, Gregory Lynn Sikes on December 20th, 1974, in Brownwood. They built a beautiful life together and were married for 34 years before his passing in 2009. They were blessed with 2 children, Christopher Lynn in 1980 and Steffanie Leanne in 1987. Professionally, she worked and retired from the Williamson County District Clerks Office and always spoke fondly of her time there. To those that were blessed to know her, she was affectionately known as Nana to her 6 grandchildren that she loved so deeply. Her family, children and grandchildren brought her great joy. She cherished every moment spent with them. Over the course of her life, she loved being outside and enjoyed gardening. She also enjoyed puzzles, traveling, and spending time with her family. She was always the life of the party with her jokes and cheerful personality. Debra is survived by her son, Christopher Sikes and wife Crystal of Bertram; her daughter, Steffanie Sharp and husband Christopher of Early; and her beloved grandchildren, Madison Sharp, Caitlyn Sikes, Pearl Sharp, Coy Sikes, Declyn Sharp, and Shepherd Sharp. She is also survived by her brother, Mike Beal, sister, Pam Lake, and several nieces and nephews. Debra is preceded in death by her husband, Gregory Sikes; along with her parents, Leona Boler and Timothy Beal. We are going to celebrate her life and legacy 2 pm Tuesday, July 20th at Davis Morris Funeral Home in Brownwood, Texas. Burial will follow in Greenleaf Cemetery. Visitation will be held Monday, July 19th from 5-7pm.

The family of Debra Pearl Sikes created this Life Tributes page to make it easy to share your memories.

Send flowers to the Sikes family.