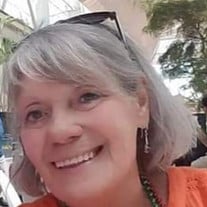 Deborah Mires, 67, passed away on September 2, 2021, in Brady, TX. She lived most of her life in Brady where she worked at her parents family restaurant Weavers Smoke Shack. She also worked at Twin Liquor / JP Liquor for over 25 years.... View Obituary & Service Information

The family of Deborah Carol Mires created this Life Tributes page to make it easy to share your memories.

Send flowers to the Mires family.