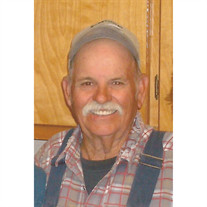 David Ray Stewart, 73, of San Saba, passed away at his home on Monday, March 9, 2015. David was born to Steven and Annie Stewart on September 11, 1941, in Salinas, California. David hitchhiked from California to Texas when he was 13 years old. He enlisted in the United States Army when he was 20 years old where he served in the Cold War. He married the love of his life, Nancy Fitzgerald in San Saba on May 15, 1964, raised 3 children and celebrated their 50th Wedding Anniversary last year. David worked for the Texas Highway Department in San Saba for 13 years before he started his own construction company Stewart V Construction and worked for ILCOR, Inc. out of Austin, Texas for 27 years. He was a lifelong member of the VFW Post #3278 in Brownwood, Texas. David retired in February 2004 where he enjoyed making memories with his family, hunting, fishing, raising cattle, cooking on the bbq pit, baking cakes, cookies and zucchini bread. He was an amazing grandfather and taught every grandchild to say Paw Paw #1. When he retired, his family bought him a Kitchenaide mixer where he found his second passion which was baking. This became therapy for him during his 4 year battle with cancer where he blessed many families, nurses, doctors and the public in general. On Mother's Day in 2012, he baked over 500 cookies packaging 3 different flavors in a gift bag and delivered them randomly to 150 different ladies in town to bless them on their special day. He had cards printed up that said "Thank God for Mothers! Without Mothers Nobody Would Be Here!" David was a member of Hill Country Bible Church and loved worshiping the Lord and visiting with his church family where on many occasions he baked sweets for Sunday morning. He lived his life with a servant's heart and endured to the end loving the Lord. David is survived by his wife; Nancy Stewart of San Saba; 1 son: Jessie Stewart and wife, Shela, of Maryland; 2 daughters: Eva McDuff and husband, Trey, of San Saba and Ellen Leyva and husband, Robert, of Lampasas; 1 brother: Daniel Dean Stewart and wife, Wanda, of California; 3 grandson: David Nathan Stewart and Zachery Stewart, both of Maryland, and Kirby McDuff of San Saba; 5 granddaughters: Kara Dawson of Austin, Jesika Poston and husband, Chris, of Killeen, Ashley Seale of Okinawa, Japan, Jillian Seale of Lampasas and Kailan Stewart of Maryland; 3 great grandchildren: Blaze, Asher and Jaxon. He is preceded in death by his Father, Steven Stewart; Mother, Annie Stewart; 1 sister; Lilly Manning.

David Ray Stewart, 73, of San Saba, passed away at his home on Monday, March 9, 2015. David was born to Steven and Annie Stewart on September 11, 1941, in Salinas, California. David hitchhiked from California to Texas when he was 13 years old.... View Obituary & Service Information

The family of David Ray Stewart created this Life Tributes page to make it easy to share your memories.

Send flowers to the Stewart family.