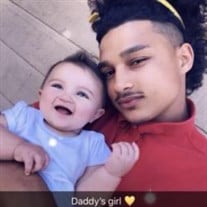 Darian Nelson Duane Barlow, 21, was unexpectedly taken from this life on October 16, 2021. He was born on November 22, 1999, in Temple, Texas to Tony Duane Barlow and Tammy Jo Guthrie Fagan. Darian was an aspiring musician and singer. His stage name was Ybeezo. He attended Lampasas High School and was a proud Badger football and basketball player. He basically loved watching and playing many sports. He was a practical joker, loved to make friends and family laugh, and lit up the room when he entered. He adored his family, his girlfriend and his little girl, and spending time with family at Bar-b-ques and get togethers. He loved to be outdoors. Darian was a non-denominational Christian. Darian is survived by his parents, Tammy Guthrie Fagan of Lampasas, Chris Fagan (Pops) of Lampasas, and Dad, Tony Duane Barlow, of Georgetown, and girlfriend, Brittany Pugh of Killeen, daughter, Avianna Barlow of Killeen, six brothers, Dee Jones, Dailin Fagan, Dayvion Fagan, and David Fagan, all of Lampasas, Trevion Barlow, and Devin Barlow, both of Leander, three sisters, Toni Barlow of Austin, and Chrislyn Fagan and Clara Fagan, both of Lampasas. He is also survived by his paternal grandparents, Leroy and Yvonne Barlow, nephews, Derrick Jones, Jr. and Aziel Jones and one niece or nephew on the way. He leaves behind numerous other loving relatives and friends. He is preceded in death by his maternal grandparents, David and Sally Guthrie. The visitation for Darian will be on Saturday, October 23, 2021, at 10:00 AM with the funeral service to follow at 11:00 AM, at Heritage Funeral Home in Lampasas. A private family burial will occur later. David Guthrie will officiate the service. Pallbearers will be Trevion Barlow, Hoss Guthrie, Thomas Guthrie, Hanna Guthrie, Mike Sweet, Dayvion Fagan (honorary), Oral (Jr.) Hutson, Dailin Fagan (honorary), David Guthrie and Derrick Jones. Arrangements are entrusted to Heritage Funeral Home of Lampasas.

Darian Nelson Duane Barlow, 21, was unexpectedly taken from this life on October 16, 2021. He was born on November 22, 1999, in Temple, Texas to Tony Duane Barlow and Tammy Jo Guthrie Fagan. Darian was an aspiring musician and singer. His... View Obituary & Service Information

The family of Darian Nelson Duane Barlow created this Life Tributes page to make it easy to share your memories.

Darian Nelson Duane Barlow, 21, was unexpectedly taken from this...

Send flowers to the Barlow family.