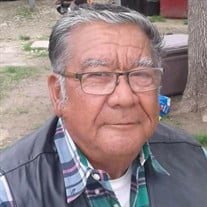 Daniel L. Sapien, 76 of Terrell, Texas, formerly of Lampasas, died on August 19, 2021, at Dallas Medical Center in Farmers Branch. Mr. Sapien was born on January 18, 1945, in Lampasas, to Gumencindo Sapien and Manuela Longoria Sapien. He was of the Pentecostal faith. Daniel was a carpenter by trade. His favorite pastime was building chairs and toyboxes for his grandchildren and great grandchildren. He loved spending time with his grandchildren and great grandchildren. He enjoyed his Sunday mornings at his church. He also enjoyed shopping for good deals and going to garage sales. He retired from the Mesquite Independent School District as a carpenter. One year Daniel received an award from the school for being a safe driver, for the past 25 years, however, he was known by his family to be a very aggressive driver. The day after receiving his award he backed his car into another vehicle. Daniel is survived by two daughters, LaDonna Melendez of Terrell and Shaina Purnell and husband Wess of Wills Point, Texas, two brothers, Inez Sapien of Terrell, and Joe Sapien of Lampasas, and one sister, Frances Arzola of Kelso, Washington. Daniel leaves behind four grandchildren, Anthony Melendez, Tierney Melendez, Liam Purnell, and Maddox Purnell and two great grandchildren, A.J. Melendez, and Lylah Melendez. He is preceded in death by his parents, one brother, Salestino Sapien, and one sister, Della Sapien. Numerous loving nieces and nephews also survive. Daniel was a loving caring father and friend to everyone he was blessed with in his life. There will be a visitation for Mr. Sapien from 5:00 – 7:00 PM on Thursday, August 26, 2021, at Heritage Funeral Home in Lampasas. The funeral ceremony will be on Friday, August 27, 2021, at 11:00 AM at Heritage Funeral Home with burial to follow at Oak Hill Cemetery in Lampasas. Arrangements are entrusted to Heritage Funeral Home of Lampasas, Texas.

Daniel L. Sapien, 76 of Terrell, Texas, formerly of Lampasas, died on August 19, 2021, at Dallas Medical Center in Farmers Branch. Mr. Sapien was born on January 18, 1945, in Lampasas, to Gumencindo Sapien and Manuela Longoria Sapien. He was... View Obituary & Service Information

The family of Daniel L. Sapien created this Life Tributes page to make it easy to share your memories.

Send flowers to the Sapien family.