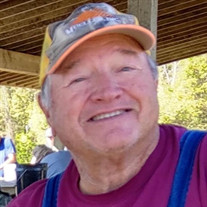 Daniel Waldo Griffin, 68, longtime resident of Lampasas, Texas, passed away on January 30, 2022, in Killeen, Texas. Daniel was born on October 1, 1953, in Taylor, Texas to Melvin Waldo Griffin and Doris Mae Henniger Griffin Poe. Daniel married Nancy Reed on January 27, 1973, at the Baptist Church in Lake Victor, Texas and enjoyed 49 years of marriage. Daniel was a farmer and rancher during his life as well as a heavy equipment operator in the mining industry. He was a member of the Milam County Junior Livestock Board, the Rockdale Fair Association and was a 4-H Leader in Milam County. He was a member of the IBEW Local Union 2337 and the IUOE Operators Local Union 450. Daniel could name any tree or plant, he enjoyed hunting, fishing, and searching for and collecting rocks and arrowheads. Mr. Griffin was a devoted husband, father, and grandfather. Daniel was a Christian. He is survived by his wife, Nancy Griffin of Lampasas, two sons, Daniel Ashley Griffin and wife Amy of Milano, Texas and Chad Avery Griffin and wife Kendra of Bellevue, Texas, one daughter, Catrina Gayle Griffin of Killeen, his mother, Doris Henniger Griffin Poe of Lampasas, one brother, Clifford Ray Griffin of Lampasas and one sister, Yolanda Kae Maceyra, and husband Bill of Lampasas. There are eight grandchildren, Logan Griffin, Jake Penick, Jason Penick, Jimmy Penick, Jude Penick, Jayston Griffin, Corbin Griffin and Rhett Griffin and numerous nieces and nephews. Preceding Daniel in death are his father, one brother, Doug Griffin and his in-laws, David B., and Allie Reed. There will be a visitation on Friday, February 4, 2022, from 5-7 PM at Heritage Funeral Home in Lampasas. The funeral service will be at 3:00 PM on Saturday, February 5, 2022, at Heritage Funeral Home with Mr. Kirby officiating. Burial will follow the funeral service at the Alexander Family Cemetery, near Lampasas in Burnet County. Pallbearers serving are Jarrod Griffin, Zach Griffin, Clint Butler, Will Butler, Samuel Blakley, and Kirk Blakley. Honorary pallbearers are Mr. Griffin’s nieces and nephews. If you are unable to attend the service, please go to heritagefuneraltx.com, select Mr. Griffin’s tribute and the live stream web cast will be found there. Arrangements are entrusted to Heritage Funeral Home of Lampasas, Texas.

The family of Daniel Waldo Griffin created this Life Tributes page to make it easy to share your memories.

Send flowers to the Griffin family.