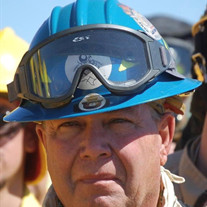 Lake Brownwood - Services for Christopher Mack Weber, 73, of Lake Brownwood, will be at 1:00 pm. Saturday, March 19, in the Davis Morris Funeral Home Chapel. Family and friends are invited to join in a celebration of life immediately following the ceremony at the Dam Volunteer Fire Department Community Center at Lake Brownwood. Mr. Weber died of complications related to Covid. Chris Weber was a salt of the earth man. He was tough and gentle and kind with eyes that crinkled in all the right places. He was larger than life and had a million stories. His heart was big, and he always seemed to fill up the room. If you needed help, he was there without even being asked. "I love you. I'm proud of you. You are more than enough," this he never failed to say to his children and grandchildren. And for that, they are eternally grateful. Born to Iris Sybal Hicks Weber and Alexander Weber in Armherst, Texas on November 26, 1948, Chris always lived an authentic life. In his early life, he lived on a farm with his parents and frequently talked of his adventures with his father, Alex. At the age of six he went hunting with Alex, and darn near froze to death. But when asked if he was cold, he always replied, "no," because he didn't want the hunting trip to end. Throughout his life there would be many more hunting trips to the cabin in Wyoming with Alex and his brothers, and these stories were always sure to bring a chuckle. At the age of ten, Chris and his family moved to Lake Brownwood. There he and his parents ran Lakehaven Docks for thirty-nine years. This was also where Chris met his brother by choice, Steve York. Many adventures were had on the lake-sail boating, attempting to drown people on the Wild Woman, and every Wednesday after his children were born you could find him on the lake taking them for a spin on the inner tube or skis. Chris attended Brownwood High School, and he achieved the rank of Eagle Scout. Later in life, he was also a Scout Master, and many young men would hear his fantastical stories, about his fear of snakes, and be invited to go on a Snipe hunt. In 1985, Chris was a founding member of the Dam Volunteer Fire Department. He served both as Fire Marshall and later as Chief until his death. This was his lifelong passion and one of his proudest accomplishments. He took great pride in what he and his crew built, and you could always count on him to alert everyone of burn bans or other fire issues. He would also happily share tales of his fire fighting adventures, and eagerly welcomed anyone who wanted to learn more about the art of fire fighting. Many people also knew Chris from the Bingo parlor. The Dam Volunteer Fire Department ran bingo games for fund raising, and if you attended you would hear Chris calling out "B 52." He had his favorite players, and they certainly loved him. He couldn't make it through a shopping trip without at least one or two stopping to give him a hug and to tell him that he needed to call better numbers the next game. Chris had a natural gift for story-telling, some of which were true. Fishing, hunting, dogs, and the love of his family and friends were his simple pleasures. Chris had two love languages-teasing and cooking. If you were a friend or family you probably received a nickname, a dunking in the minnow tank, a remark about your shoes, clothes, or hair, and an invitation to dinner on the "Aft deck." He once remarked that he wasn't successful in the traditional sense, but in friendship, the lives he touched, and the stories he lived, he was rich beyond measure. He is survived by companion Shasta Loyd, life long friend Debbie Weber Crow brother through love Steve York; three children, Stephanie Weber and husband Bill Rogers, Shawna Weber and husband Bryan Walters, and Christian Dan Weber and wife Kaleigh; eleven grandchildren, Alex and Taylor Grimsley, Shay and Anthony Rogers, Noah Walters, Karly Weber Jones and husband Daniel, Christian, Brooklyn, Scout, and Kase Weber, and Korbin Middleton; great-grandchild Bryce Jones, his brothers and sisters in the Lake Brownwood Fire Department Community; and numerous cousins. Memorials may be made to the Dam Volunteer Fire Department P.O. Box 75, Brownwood, TX 76804

Lake Brownwood - Services for Christopher Mack Weber, 73, of Lake Brownwood, will be at 1:00 pm. Saturday, March 19, in the Davis Morris Funeral Home Chapel. Family and friends are invited to join in a celebration of life immediately following... View Obituary & Service Information

The family of Christopher Mack Weber created this Life Tributes page to make it easy to share your memories.

Send flowers to the Weber family.