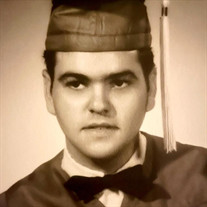 Charles Alton Myers 69, of Lampasas, TX passed away peacefully with his children by his side on January 28, 2022, after fighting a long, hard battle with cancer. He was born in Dallas County, Texas on June 22, 1952, to Alton J Myers and Annie Darlene Coble. Charles was an avid fisherman who loved to BBQ with family and friends. He also loved driving the backroads and enjoyed any moment he could be outdoors. Anyone who knew him, knew his favorite thing to say was “Let’s Take a Ride”. You never knew where you would end up, but you would enjoy the time and talks. If you ever slept in, you were “Burning Daylight”. He was a graduate of Lampasas High School Class of 1970. After graduation he was an entrepreneur, including his love for cooking which led him to manage a Luby’s restaurant and start his own BBQ Smoke House. He also was a contractor for many years and once retired he then started woodworking and building Cedar Furniture. His heart and generosity were so big that in a time of need he was always the one you went to for help or advice. He was a Christian with a strong love for the Lord, which he embraced till his last breath. He is survived by his brothers Jim and wife Gayle Myers of Lometa, Doug and wife Christy Lavender of Lampasas, Randy and wife Kathy Long of Lampasas, a sister Earlene and husband Charles Champion of Lampasas, his 4 beloved children, Angela Roberts of Kingsland, Casey and wife Nellie Jorgensen of Beaumont, Charlie Myers of Marble Falls, and Blake Myers of Weatherford. Including 10 Grandchildren, and 5 Great Grandchildren, and numerous nieces and nephews. Charles is preceded in death by his loving parents, and his stepmother Lois Myers. Funeral arrangements are being made by Heritage Funeral Home in Lampasas. The Viewing will be Monday January 31, 2022, from 5-7pm. The Funeral will be Tuesday February 1, 2022, at 10am with a graveside burial at Senterfitt Cemetery in Lometa where he will be laid to forever rest beside his parents. If unable to attend the funeral service, please go to heritagefuneraltx.com, select Mr. Myers tribute and webcast will be available there.

Charles Alton Myers 69, of Lampasas, TX passed away peacefully with his children by his side on January 28, 2022, after fighting a long, hard battle with cancer. He was born in Dallas County, Texas on June 22, 1952, to Alton J Myers and Annie... View Obituary & Service Information

The family of Charles Alton Myers created this Life Tributes page to make it easy to share your memories.

Send flowers to the Myers family.