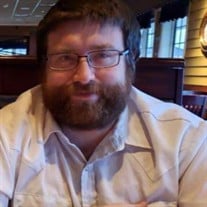 Charles E. Kattner, 31, of Copperas Cove, Texas died on August 20, 2021, at Rollins Brook Hospital in Lampasas, Texas. Charles was born on September 15, 1989, in Temple, Texas to Richard W. Kattner, and Jannetta Arms Kattner. Charles attended the Copperas Cove Baptist Church. Charles was the chef at Lil’ Tex Restaurant in Copperas Cove. He had attended the Killeen Fire Academy and was a certified fire fighter. He had also earned his EMT certification. He loved his 1992 Ford F150 that he inherited from his grandfather. Charles enjoyed outdoor activities, including fishing, hunting and golf. He loved his pet chinchilla Bubbles. He loved his family dearly. He was a kind man and was always there and willing when someone needed help. Mr. Kattner is survived by his parents, Richard, and Jannetta Kattner of Lampasas, one brother, Rocky Wolfe of Lampasas and one sister, Anna Busch of Gatesville, Texas. He has one niece, Roxy Wolfe and one nephew, Logan Busch. Numerous loving aunts and uncles also survive Charles. Charles is preceded in death by his maternal and paternal grandparents, four uncles, Micky, Bobby, Marvin, and Charles Arms and one aunt, Nelda Foshin. On Saturday, August 28, 2021, there will be a visitation at 10:00 AM at Heritage Funeral Home with a service immediately following at 11:00 AM officiated by Rodney Andrews. Burial will follow the service at Oak Hill Cemetery in Lampasas. Memorial donations in lieu of flowers may be made to the American Heart Association. Arrangement are entrusted to Heritage Funeral Home of Lampasas.

The family of Charles Edwin Kattner created this Life Tributes page to make it easy to share your memories.

Send flowers to the Kattner family.