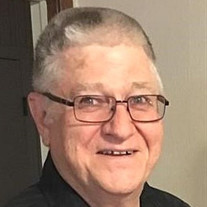 Charles "Charlie" Burton Jobe, 72, passed away Monday, January 31, 2022, in El Dorado, Arkansas. Charlie was born July 30, 1949, in Ballinger, TX to W.C. Jobe & Laura Beatrice McCullough Jobe. He graduated from Ballinger, TX High School in 1968. He went on to work in production at 3M Co. in Brownwood, TX in 1970 and retired in 2005 after 35 years of service. He was a member of College Avenue Church of Christ in El Dorado, AR. Charlie was a former member of Early Church of Christ in Early, TX where he served as a deacon. He was a member of the Early Volunteer Fire Department for 21 years and served as Fire Marshal. Preceding him in death are his parents and his brother, Tommy Jobe. Survivors include his wife, Lesa Coffman Jobe of El Dorado, AR; two sons, Kent Jobe (Cara) of El Dorado, AR & Bryan Jobe (Emily) of Saline, MI; a sister Janet Gindlesperger (Ron) of Fredericksburg, VA; a sister-in-law, Janis Jobe of Andrews, TX; a brother-in-law, Larry Coffman (Pam) of Bertram, TX and five grandchildren, Derek, Austin and Brylee Jobe of El Dorado, AR and Amelia and Andrew Jobe of Saline, MI. Visitation will be from 5:00 p.m. to 7:00 p.m. Sunday, February 6, 2022, at Heritage Funeral Home Davis-Morris Chapel in Brownwood. Funeral services will be held Monday, February 7, 2022, at 10:00 a.m. at the Early Church of Christ with Kent Jobe and Bryan Jobe officiating. Interment will follow at 3:00 p.m. at Wesley Chapel Cemetery in Florence, TX, FM 2338 between Georgetown and Andice under the direction of Heritage Funeral Home Davis-Morris Chapel in Brownwood. Services entrusted to the care of Heritage Funeral Home, Davis-Morris Chapel. Friends and family are encouraged to view the online memorial at www.heritagefuneraltx.com. Memorials may be made to the donor's choice.

The family of Charles Jobe created this Life Tributes page to make it easy to share your memories.

Send flowers to the Jobe family.