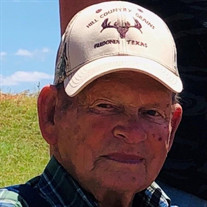 Charles Floyd Hale Sr. was born on July 7, 1933 to James Bolin and Dixie (Yates) Hale in Coryell Co., TX and passed away on April 10, 2021 in Brady, TX. at the age of 87 years old. Their family lived in Lampasas and Kempner, TX until moving to Tom Green Co and settling around Carlsbad, TX. Charlie attended Carlsbad school and later graduated from Water Valley High School in 1954. He lived in Carlsbad, TX all his adult life until moving to Pontotoc, TX. in 2018 to live with his son and daughter-in-law. After graduation dad served in the Korean War as a military policeman from 1954-1956. On April 8, 1960 he was united in marriage to Margene Clements in Carlsbad, TX. They were married for 57 years until her death in 2017. They had two children Helen Lynn and Charles (Charlie) Hale Jr. He worked for his in-laws Duke & Vivian Clements at their grocery and service station business for many years. He was employed by the San Angelo State School, as well as William B. Wilson ranches in the 80’s, Iraan ISD and Water Valley ISD. He retired two times and each time he went back to work because he just could not stay idle. He also served as a Constable several years for Tom Green Co. His final job was for the city of San Angelo transportation system. Charles was a member of the Carlsbad church of Christ and shared interim preacher duties between pastors. He loved country and gospel music especially listening to the Gaithers. He loved to farm, raise goats, hunt, fish, garden, genealogy and watching his kids, grand-kids, and great-grandkids rodeo, participate in stock shows, or play sports. Fishing was his favorite and he loved to go anytime it was possible! Dad was a humble man and had a BIG heart! He loved his family and was proud of them all. His favorite time of the year was the family reunion with his mother’s family in Lampasas. He so enjoyed being with his family and it was the highlight of his year. Family was the most important thing to him. He was a very social person and seldom ever met a stranger and if he did, they were not a stranger for long! He cared about people and had a giving heart helping anyone if he could. He was a faithful, Christian man and would be glad to talk to you about it too! He led a good life full of good times and he will be missed very much! He is survived by his daughter Helen Harvey and husband Scott of Hydro, OK and son Charlie Hale and his wife Sandra of Pontotoc, TX. Granddaughter Shanna Shireman and husband Justin of Yukon, OK, grandson Cody Blair and wife Breanne of Water Valley, TX, and granddaughter Maci Berry of Mangum, OK. Two great-granddaughters Kalyn Grace and Kallie Gene of Yukon, OK and great grandson Jace Berry of Mangum, OK. Sisters Mary Fenner of Beaumont, TX and Thelma Phillips and husband Bill of Lubbock, TX. and Brother-in-Law Bill Broncy of San Angelo, TX. He has many nieces and nephews, greats, great-greats, and great-great-greats who he cherished with all his heart. He was preceded in death by his parents, his father and mother-in-law, his brothers Chester, William (Buck), James, Lestlie, Herbert and Fred and sisters Lois, Clara, & Otha Mae and his sister-in-law Jeanette Broncy. In lieu of flowers, the family requests memorials be made to the Pontotoc Volunteer Fire Dept, PO Box 66, Pontotoc, TX. 76869 or the Carlsbad Volunteer Fire Dept, PO Box 424, Carlsbad, TX 76934. Special thanks to all the staff at Brady West Rehab & Nurse Center and Solaris Hospice and especially Charlie and Sandra for taking such good care of dad. A memorial graveside service will be on Sunday, April 25, 2021 at 10:00 a.m. at the Grape Creek Cemetery in Grape Creek, TX. Cremation services provided by Heritage Funeral Home in Brady, TX. Go Rest High on that Mountain, Son Your Work on Earth is Done, Go to Heaven a-shouting, Love for the Father, and the Son. We hope you find a good Crappie pond and fish all you want!

Charles Floyd Hale Sr. was born on July 7, 1933 to James Bolin and Dixie (Yates) Hale in Coryell Co., TX and passed away on April 10, 2021 in Brady, TX. at the age of 87 years old. Their family lived in Lampasas and Kempner, TX until moving... View Obituary & Service Information

The family of Charles F. Hale Sr. created this Life Tributes page to make it easy to share your memories.

Send flowers to the Hale family.