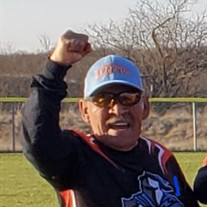 Carlos Robles, age 77, of Brownwood, passed away Sunday, December 5, 2021, at Hendrick Medical Center South in Abilene. Carlos was born August 4, 1944, in Brownwood, the son of Charlie and Carmen (Ballejo) Robles. He was a proud resident of Brownwood his entire life. Carlos loved his job at Kohler where he worked for over 30 years until he retired. Here, he was able to meet his long time best friend Joey Soto of Brownwood. Carlos loved watching the Dallas Cowboys and Texas Rangers. He enjoyed sports of all kinds, participating in and winning many powerlifting meets. He also loved playing baseball and devoted the majority of his life to coaching youth teams. Most recently he assisted Chad Lorah and Mitchel Wilkerson in coaching the Legends Baseball team, where his beloved grandson, Abel played. Carlos was recognized with an article in the Brownwood Bulletin as an outstanding teenager during his early years. He was a devout Christian and loved the Lord. He is survived by his daughter, Carla Acevedo and husband Eleuterio Acevedo of Brownwood, sons, Carlos Barajas and Acey Sliger, several grandchildren, including Abel Sliger of Bangs, as well as several great grandchildren. Also surviving are several Aunts and Uncles including Hope McClung of Brownwood, Noemi Gonzales of Mansfield, Connie Manning of Delaware, and Frances Sauceda of Houston. Close friends Matt and Casie Wilson. He was preceded in death by his parents, his grandparents, Francisco and Concepcion Ballejo, Uncles, Manuel Ballejo, John Ballejo, Joe Ballejo, and Aunts Mary Gonzalez and, Edna Ornelas. Funeral services will be held at 2 PM on Friday, December 10, in the Davis-Morris Chapel of Heritage Funeral Home with burial to follow in the Greenleaf Cemetery. Visitation will be held from 5 - 7 PM on Thursday. There will be a luncheon before the service at 11:30 Friday hosted by the First Baptist Church in Bangs. Services entrusted to the care of Heritage Funeral Home, Davis-Morris Chapel of Brownwood. Friends and Family are encouraged to view the memorial at www.heritagefuneraltx.com.

Carlos Robles, age 77, of Brownwood, passed away Sunday, December 5, 2021, at Hendrick Medical Center South in Abilene. Carlos was born August 4, 1944, in Brownwood, the son of Charlie and Carmen (Ballejo) Robles. He was a proud resident... View Obituary & Service Information

The family of Carlos Robles, Jr. created this Life Tributes page to make it easy to share your memories.

Send flowers to the Robles family.