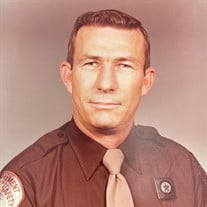 Bobby J. Montgomery, Sr., 83, died in Lampasas, Texas on Sunday, June 6, 2021. He was born on October 23, 1937, in Munday, Texas to James Paul and Essie Mae (Bridges) Montgomery. In 1970 he moved from Harker Heights, Texas to Lampasas where he lived for the rest of his life. In 1958, Bobby joined the US Army, serving in Korea. He then went into the Army Reserves, after which he worked at several various jobs. In 1962 he met Mildred Kay Halbaedier and they married on May 31, 1963, in Oklahoma. Bobby reentered the US Army, he served from 1967-1968 in Vietnam. He was honorably discharged in May of 1970. While in service to his country, he earned the Purple Heart; Bronze Star Medal; Vietnam Service Medal with one Silver Service Star; Combat Infantryman Badge; Republic of Vietnam Campaign Medal; National Defense Service Medal; Expert (M-60 MG) and Sharpshooter (Rifle). Forty-eight years after serving in Vietnam, Bobby was issued the Cross of Gallantry. From 1970-1974, Bobby was a police officer for the Lampasas Police Department and went on to become a communications officer for the DPS from 1974-1994, where he retired. Bobby loved fishing, golfing, painting, and doing woodwork. He was a devoted Grandad and Great Grandad. Bobby was preceded in death by his parents, James Paul, and Essie Mae (Bridges) Montgomery, his wife Mildred Kay Montgomery in 1998, two brothers, Leo, and James Montgomery and three sisters, Alice Philly, Patricia Montgomery, and Mary Jo Bagwell. Mr. Montgomery is survived by two sons and their wives, Bob Montgomery, Jr. and Jennifer, and Dallas Montgomery and Michelle, all of Lampasas, and one daughter, Yvonne Moreno of Lampasas. He has six grandchildren, Erin and Brynn Montgomery of Lampasas, Kelly Montgomery of Michigan, Tyler Montgomery and Jennifer of Bay City, Amanda Shoulders and Joshua of Royse City, and Kyle Moreno of Lampasas. There are five great grandchildren, Lucas Poissot and Zander Montgomery of Lampasas, Dallas Jordan Montgomery of Michigan, Jenna Montgomery of Bay City and Cooper Shoulders of Royse City. Numerous nieces and nephews survive. The visitation for Mr. Montgomery will be from 6:00-8:00 PM on Friday, June 11, 2021, at Heritage Funeral Home in Lampasas, Texas. The funeral will be held at 10:00 AM on Saturday, June 12, 2021, at Heritage Funeral Home in Lampasas. The officiant will be Bob Montgomery, Jr., assisted by Ray McCoy. Burial will follow at Oak Hill Cemetery in Lampasas with military honors. Pallbearers serving will be Tyler Montgomery, Joshua Shoulders, Kyle Moreno, Mario Moreno, Brandon Poissot and Alex Campbell. The family requests memorial donations to St. Jude Children’s Research Hospital. Arrangements are entrusted to Heritage Funeral Home of Lampasas.

The family of Bobby J. Montgomery Sr. created this Life Tributes page to make it easy to share your memories.

Send flowers to the Montgomery family.