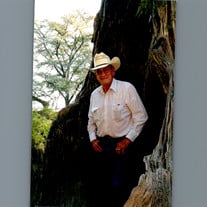 Bob W. Loyd, age 88, of Zephyr, passed from this life on Monday, August 30, 2021 at the Care Inc. nursing home in Early. He was born September 22, 1932 in Throckmorton, Texas the son of J. W. and Eula Mae (Garvin) Loyd. He moved to Brown County in 1949 and has lived here since. He was married to Elizabeth Anne Keeler who preceded him in death and later married Evelyn in Zephyr on September 23, 2010. He was a very active member of the Zephyr United Methodist Church where he served on several committees. He was a lifetime member of the Masonic Lodge and a member of Brownwood Lodge # 279. He was also a member of the Texas Southwest Cattle Raiser's Association, served on the board of the Zephyr Water Supply District, on the board of the Zephyr Cemetery Association, and the Brown County Youth Fair. He worked for G.T.E. for over 30 years as a switchman until his retirement and has ranched since. He is survived by his wife Evelyn Loyd of Zephyr, a son Stephen Wade Loyd and wife Linda Lou of Zephyr, a daughter, Angelique Jones and husband Don of Zephyr, a step-daughter, Donna Heard of Zephyr, six grandchildren, thirteen great-grandchildren and numerous nieces and nephews. He was preceded in death by his parents, his first wife, Anne Loyd, a brother Worthan Loyd and a sister-in-law, Joyce Loyd. Funeral services will be held at 10:30 am Friday at the Zephyr United Methodist Church with Pastor Wayne Lewis officiating. Burial will follow in the Zephyr Cemetery. Visitation will be held on Thursday from 5 - 7 PM at Heritage Funeral Home, Davis-Morris Chapel. Funeral Services have been entrusted to the care of Heritage Funeral Home, Davis-Morris Chapel in Brownwood. Condolences can be left at www.heritagefuneraltx.com.

The family of Bob Wade Loyd created this Life Tributes page to make it easy to share your memories.

Send flowers to the Loyd family.